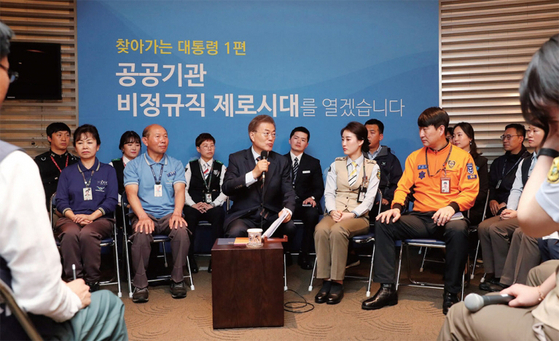 President Moon Jae-in vows to open an era with no “irregular workers” in a meeting with employees of the Incheon International Airport Corporation on May 12, 2017. [JOINT PRESS CORPS]

The author is an industry 1 team reporter of the Joongang Ilbo.


Regular and irregular jobs are not legal terms. The Labor Standard Act, the basis of labor-related laws, do not contain the terms. While they are often used in daily life, the two forms of work cannot be strictly divided. There is no internationally accepted standard for irregular jobs. The Organization for Economic Cooperation and Development identify and compare temporary workers by country, based on the temporary nature of employment.

In Korea, the social definition of irregular jobs dates back to 2002, when the tripartite commission among employers, unions and government classified irregular workers into three types: Temporary workers who have a labor contract indicating a fixed term or who have a contract not indicating a fixed term but cannot expect to continue working for involuntary reasons; hourly workers who work shorter hours than regular workers; and atypical workers who are dispatched or subcontracted or engaged in special forms of labor.

Irregular workers were classified separately because various types of work became available after the 1997 financial crisis and they needed social protection. The tripartite committee announced that the government decided to strengthen labor supervision in order to expand the application of social insurance and welfare to irregular workers and enhance their working conditions. The government began compiling statistics on the irregular workforce from 2003, based on the tripartite agreement.

According to Statistics Korea, the number of irregular workers in Korea marked 8,066,000 as of August. It is the first time that irregular workers have exceeded 8 million. Compared to a year ago, the number increased by 640,000 from 7,426,000. Compared to August 2016, nearly a year before the start of the Moon Jae-in administration, 1.62 million people have been added. President Moon’s “zero irregular employment” pledge has fallen flat.

In an address to the National Assembly on Oct. 25, Moon said Korea was the first among developed countries to have recovered to the pro-pandemic level and that employment last month recovered to 99.8 percent of the level before the crisis. But he did not mention the sudden rise of irregular jobs.

The more than 8 million irregular jobs tell the story of the real limits on jobs created by the government budget. Also, it shows how a policy with only belief and willpower can fail. The policy for irregular jobs is still trapped in 2002.

Hiring managers predict job market will worsen in second half