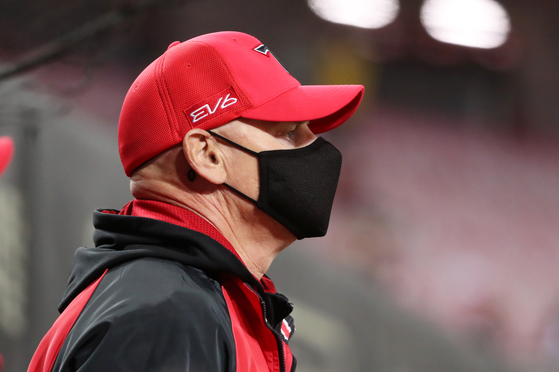 
The Kia Tigers announced Monday that they have parted ways with manager Matt Williams following a disappointing ninth-place finish to the 2021 KBO season.

Williams managed the Tigers for two years, finishing the 2020 season in sixth-place. According to the Tigers, the parties mutually agreed to cut ties for the good of the team.

As the season is already over for the Gwangju club, coach Kim Jong-kook will step in to lead the Tigers through their season-ending training schedule, with a new manager set to be announced during the offseason.

CEO Lee Hwa-won and General Manager Cho Kye-hyeon also stepped down. Kia Vice President Choi Jun-young was provisionally appointed as the new CEO of the baseball club, with the appointment to be confirmed at an upcoming board meeting.

Kia finished the 2021 season with 58 wins, 76 losses and 10 ties to take ninth place, a full 17.5 games behind the winning KT Wiz. The club's home results were especially disappointing, with 31 wins and 37 losses in Gwangju.

Williams, who won National League Manager of the Year with the Washington Nationals in 2014, spent a few years as a coach with the Arizona Diamondbacks and Oakland Athletics before joining the Tigers in 2019.

Despite the excitement at the arrival of such a prestigious major league figure in the KBO, Williams was unable to turn around the struggling Tigers. The Gwangju club, which remain the most successful team in Korean baseball, have only reached the championship series once in the last decade. The Tigers won the Korean Series in 2017, but have failed to make it past the Wildcard every other season since 2011.