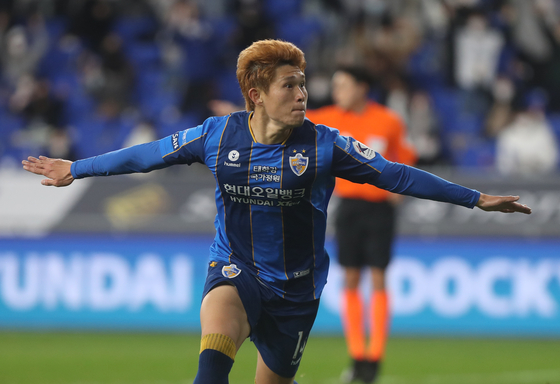 Ulsan Hyundai's Lee Dong-gyeong celebrates after scoring the winning goal of the match against Suwon FC at Munsu Football Stadium in Ulsan on Sunday. [YONHAP]


After the first week of the final stage of the 2021 K League season, Ulsan Hyundai and Jeonbuk Hyundai Motors are still tied at No. 1.

When all regular matches finished for the 12 clubs on Oct. 24, the league split into two groups for the final stage of play — the top six teams competing for the championship title and the bottom six fighting to avoid relegation.

On Sunday, Ulsan took a narrower 3-2 win at home against Suwon FC. It was Lee Dong-gyeong who slotted in the winning goal in the last few minutes of the game. Ulsan and Jeonbuk remain level with 67 points each.

The two other clubs in the top Group, Daegu FC and Jeju United, faced each other earlier on Sunday at DGB Daegu Bank Park in Daegu, where Jeju pulled off a big 5-0 win against the home team. Jeju has now taken one set up to fourth place on the standings after sitting at fifth last week. Daegu stays in third place.

In the latter half of the standings, Incheon United and Seongnam FC were the only ones to take three points.

Incheon beat FC Seoul 2-0 on Saturday at home. Incheon put on a much more aggressive display than the Seoul side, making 17 fouls as opposed to Seoul’s six, but had a higher ball possession rate and more shots on target, two of which converted and brought three points to the team.

Later in the day, the match between Seongnam and the Pohang Steelers demonstrated that converting was all that mattered in the end. The Pohang side had a much higher ball possession rate of 68 percent compared to Seongnam’s 32, more shots, more shots on target and more fouls, but still lost 1-0.

Pohang dropped down to eighth position and Seongnam stepped up to ninth position. Incheon tops the Group B standings at seventh and Seoul dropped to 11th.

Among the B teams, the last-place club once the season is finished will be sent straight down to the K League 2, while the second-to-last club will have to face a K League 2 team in a playoff to determine who plays in the top league next year. Gwangju are currently in the guaranteed relegation spot. 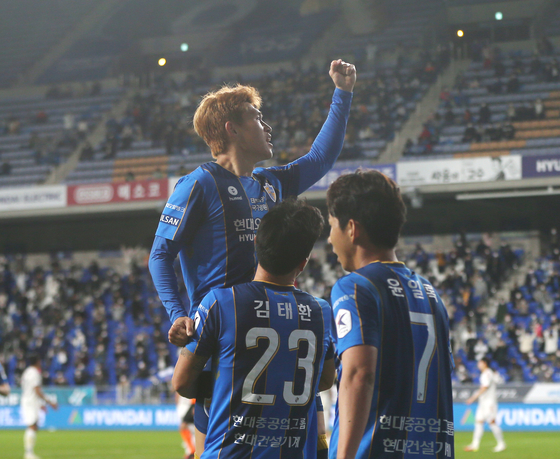 Ulsan Hyundai's Lee Dong-gyeong celebrates with his teammates after scoring the winning goal of the match against Suwon FC at Munsu Football Stadium in Ulsan on Sunday. [YONHAP]


With four matches left for each club until the end of the season, the big showdown between Ulsan and Jeonbuk will take place on Saturday at Jeonju World Cup Stadium in Jeonju, North Jeolla. The last time Ulsan faced Jeonbuk was on Sept. 10, when they took a 0-0 draw.

The stakes are especially high for Ulsan, who have gone from chasing a historic triple to barely holding on to the K League top spot in just a few weeks. Less than a month ago, Ulsan were in the quarterfinals of the AFC Champions League, the semifinals of the FA Cup and leading the K League without a serious challenger.

The Champions League bid fell apart when the Pohang Steelers beat Ulsan in the quarterfinals, ending the triple bid.


K League will continue with the second week of the final stage on Wednesday when Pohang faces Gangwon at the Pohang Steelyard in Pohang.