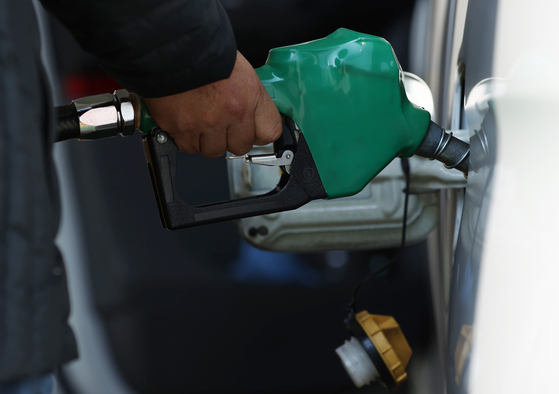 A driver pumps fuel at a gas station in Seoul on Tuesday. Gas price hikes have led to other price increases through the economy. [YONHAP]

Inflation pressure intensified as consumer prices in October grew at the sharpest rate in nearly 10 years.

According to Statistics Korea on Tuesday, consumer prices last month were up 3.2 percent compared to the same month a year ago led by fuel prices.

This was the sharpest increase since January 2012, when consumer prices rose 3.3 percent, and the first time they have grown more than 3 percent since February 2012.

Inflation has become a fear around the world as countries pull themselves out of pandemic lockdowns.

In Korea, concerns arose after consumer prices spiked more than 2 percent for each month beginning in April.

Rising international crude prices have been a driving force.

Utility prices rose after the government decided to raise electricity bills for the final three months of this year, citing increases in international crude prices.

Utility bills were up 1.1 percent.

Napa cabbage, which is used for kimchi, saw its price fall 44 percent, while the radish price was down 43.8 percent. Green onion prices were down 36.6 percent.

However, eggs were 33.4 percent more expensive than a year ago.

Pork prices were up 12.2 percent while prices of hanwoo or Korean beef were up 9 percent. Imported beef, which is cheaper than hanwoo, rose 17.7 percent. 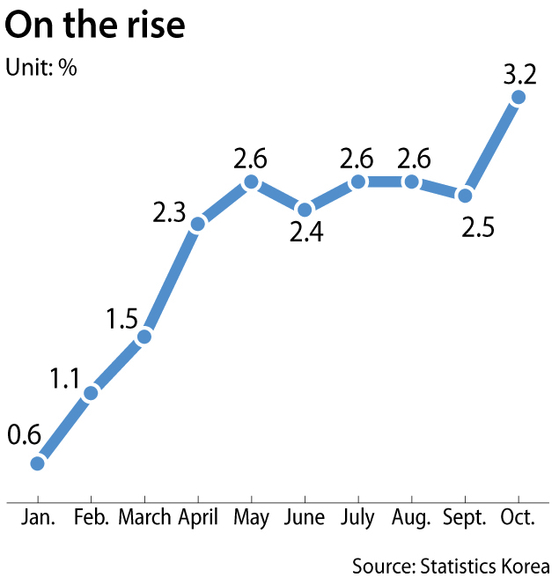 Statistics Korea was optimistic that the situation will improve with the government’s cut in fuel taxes that goes into effect Nov. 12.

“The recovery of consumer sentiment, hikes in services prices as well as rising international crude prices affecting manufactured goods are factors that could further raise consumer prices,” said Eo Woon-sun, Statistics Korea’s official. “But the cut in fuel taxes is likely to act as a factor that will lower prices.”

The government last month announced it was slashing 20 percent of the taxes imposed on fuels including gasoline until the end of April.

The government and the ruling Democratic Party said the decision to cut fuel taxes was meant to shield Korean households and companies, especially SMEs, from rising international crude prices.

The rise in consumer prices could encourage the Bank of Korea to raise the key interest rate for the second time this year.

In August, the BOK raised the key interest rates from a record low of 0.5 percent to 0.75 percent as the first step toward normalizing the monetary policy implemented during the Covid-19 pandemic.

It was the first change in nearly a year and a half.

Some expect BOK Gov. Lee Ju-yeol to raise the interest rate another 0.25 percentage points during a monetary policy committee meeting this month.

The central bank changed its projection for this year’s annual consumer prices to grow 2.1 percent instead of its earlier forecast of 1.8 percent.