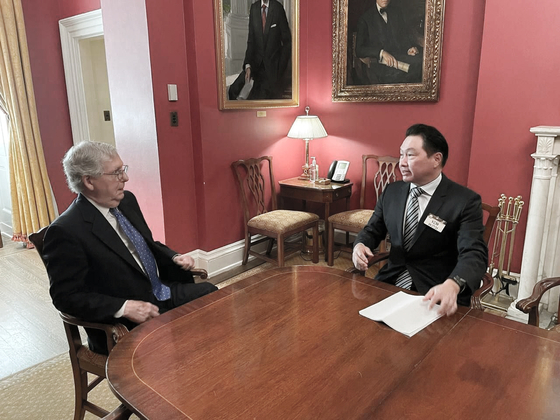 
SK Chairman Chey Tae-won told Senate Republican Leader Mitch McConnell that half of the group’s $52 billion investment in the United States will go toward electric vehicle batteries and other related renewables technologies.

The get-together took place last week while he was on a business trip to pitch the group’s commitment to carbon neutrality and investment in the U.S.

Chey, who is also chairman of Korea Chamber of Commerce and Industry (KCCI), also met other lawmakers, including James Clyburn, a Democratic member of the House of Representatives, and Tennessee Republican Senators Bill Hagerty and Marsha Blackburn.

Chey has emphasized the importance of communication with influential decision makers in the major markets given its main businesses – semiconductors, electric vehicle batteries, bio and hydrogen – are greatly affected by rules and regulations.  The chairman presented a roadmap for SK group companies to reduce carbon emissions by 200 million tons by 2030, a cut equivalent to about 1 percent of the global target of reducing carbon dioxide emissions of 21 billion tons by 2030.

In Tennessee, where SK Innovation will build an EV battery plant with Ford, Chey reported to the state’s senators that the project will create 11,000 jobs, when combined with the nearby two new factories.

The two Republican lawmakers pledged to facilitate the recruiting process in cooperation with colleges in the area, according to a statement

In regard to the joint project, Chey held a virtual meeting with Ford CEO Jim Farley on Monday.

“SK will strengthen cooperation with the U.S. in the bio business,” he is quoted as saying during a meeting with Rep. Ami Bera, a Democrat who serves on the House Foreign Affairs Subcommittee on Asia, the Pacific, Central Asia, and Nonproliferation.
Following the U.S. trip, which ended on Nov. 1, he went straight to Hungary to join President Moon Jae-in’s delegation.

He is scheduled to attend business forums as the chief of KCCI, and then go to the city of Komarom, Hungary, where SK On operates EV battery plants.