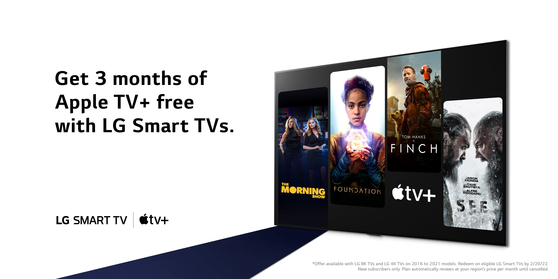 
LG Electronics launched an aggressive promotion of Apple’s video streaming service ahead of the official launch of Apple TV+ on Nov. 4.

The manufacturer said Tuesday it will offer three-month free trials for the service to LG TV owners in over eighty countries.

“Starting November 15, LG Smart TV owners in over eighty countries will be able to enjoy Apple TV+ free for their first three months,” LG Electronics said in a statement.

The TV maker explained that the promotion applies to owners of all LG Smart TV models produced between 2016 and 2021. The offer will be available until February 13.

Apple announced last week that both the Apple TV+ streaming service and the set top boxes supporting 4K or high-definition videos will be available in Korea starting Nov. 4.

A monthly subscription for Apple TV+ is 6,500 won ($5.60). Six people are allowed to simultaneously stream the service on one account.

Apple TV+ focuses on original shows, and the company will start streaming its first Korean-language original series, “Dr. Brain,” on Nov. 4. The show is based on a popular Korean webtoon of the same title and features actor Lee Sun-kyun.