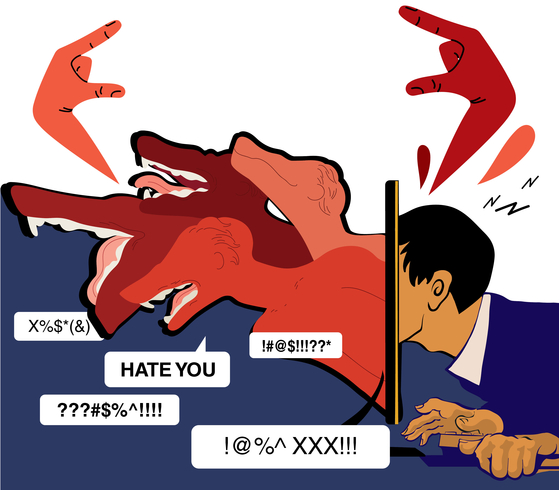 A new term stirring up the Korean online sphere is now sparking debates in the real world: the “dishwashing theory" which degrades women and married men. [AHN DA-YOUNG]


A new term stirring up the Korean online sphere is now sparking debates among pundits and the public alike.

The “dishwashing theory,” which sounds like a benign debate on household chores, arose late October on a predominantly male online community, and may suggest an evolution of hate in Korean society.

The dishwashing theory posits that young women promiscuously date men based on physical attraction, but later wed a financially stable man purely for money. The “theory” likens women who have a sexual history to leftovers that others have already eaten and claims the men who marry them are the ones who have to “do the dishes” — supporting their wives who don’t really love them.

Proponents of the theory mockingly refer to married men as “Pongpong men,” a term based on one of Korea’s dish detergent brands.

It’s no news that the Korean online sphere has long been a battleground between the sexes, and the internet constantly produces new slang and slurs. But this time, experts are focusing on an interesting aspect of the dishwashing theory — Men have now become targets of misogynistic ridicule by other men.


Marriage is a luxury

Why are unmarried men suddenly insulting married men? The current perception of marriage in Korea offers an explanation.

“Marriage is perceived as a difficult milestone to reach because it really is harder for ordinary men to get married these days,” said Park Jung-won, who has worked as a professional matchmaker for 12 years.

“Due to the bad economy, most women today know it’s too difficult to start from scratch and prefer to marry someone who is already financially stable. Also, now that more women can make money themselves, they don’t feel the need to get married unless the man has something to offer. So the bar has become quite high.”

Park runs the YouTube channel “Hanbang Sister” to share stories from her matchmaking career, and one video about some women expecting too much wealth from their potential husbands recently went viral. The video was met with passionate responses from male viewers, complaining that women nowadays have unrealistically high standards. A poll on her channel last week revealed that 70 percent of respondents, predominantly men, agreed with the dishwashing theory. 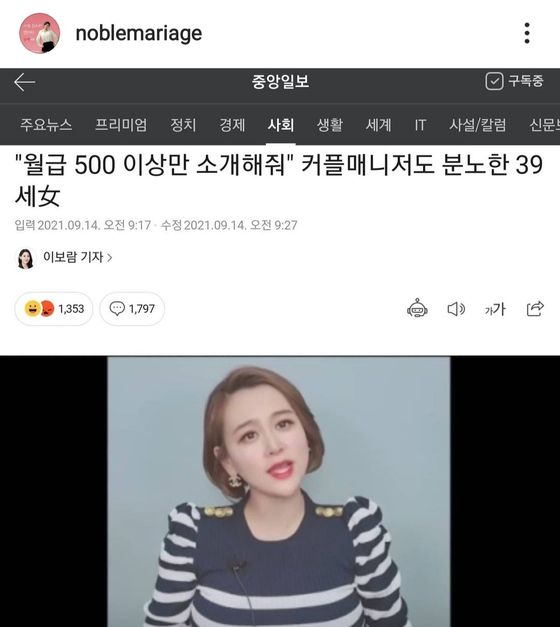 Professional matchmaker Park Jung-won shares stories from her 12-year career on her YouTube channel. One of her videos about some women expecting too much wealth from their potential husbands recently went viral. [SCREEN CAPTURE]


While Park criticized the demeaning nature of the term, she offered her analysis on where the theory may come from.

“Men tend to perceive marriage as a higher hurdle since they are conventionally expected to pay the majority of the cost,” she said. “It’s still most common for the husband to buy the house or pay for most of it. As house prices have skyrocketed in recent years, a smaller number of highly educated and financially successful men can afford to get married now.”

According to a survey from matchmaking company Duo this February conducted on 500 couples who wed over the past two years, men paid 61 percent of the total marriage cost on average, which in Korea typically includes the wedding ceremony, family gifts, major household electronics and first home.

“I can’t deny that some women marry solely for wealth,” said Park. “But some men only focus on a woman’s looks; neither is wrong. I think the dishwashing theory comes from men who in fact want to get married but can’t afford to. Since marriage became a luxury few can afford, financially unsuccessful men are envious and making themselves feel better by claiming that well-off married men are actually unhappy.”

“Considering that ‘dishwashing’ stems from comparing women to leftover food, it’s an extremely vulgar term,” said Lim Myung-ho, a psychology professor at Dankook University. “Degrading others is a way to cope with one’s sense of inferiority. Financially unstable men are rationalizing that they’re unmarried by choice to avoid being used by a promiscuous woman; it’s easier than accepting that they’re in fact unable to.”

Meanwhile, experts are focusing on an aspect of the dishwashing theory that goes beyond just another derogatory term. While the theory is based on misogyny, the new term "Pongpong men" targets men, in particular those who are well-off enough to start a family.

“I’m surprised by this new phenomenon because deriding someone higher up in the social hierarchy is practically unheard of,” said Lim. “Hate is usually projected on people who are perceived as weaker, such as women, the disabled, the elderly and children. That’s why so far, men only criticized women as gold diggers when complaining about marriage costs. But now, men are also degrading fellow men in similar age groups. It’s like turning the gun around and shooting at your allies.” 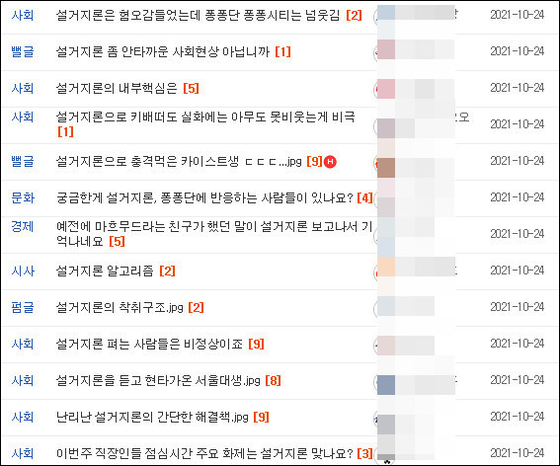 
Lee Hyun-jae, a feminist philosopher and professor at the University of Seoul’s Institute for Urban Humanities, attributes this internal divide to a shift in economic dynamics.

“Proponents of the dishwashing theory criticize women who seek financially stable men because they’re unable to provide such stability,” she said, “and they feel anxious about their lack of stability too.”

“A couple of decades ago, most men were able to support a standard four-person family with a single income. Most of the time, being a man guaranteed a certain level of social status. But that era has passed. Today, only a limited number of men in their 20s and 30s can secure high-paying, stable jobs. The social hierarchy among men grew more rigid as a result, and those who lost in the competition are projecting their anxiety on both women and men. In a way, the dishwashing theory shows that hate in Korean society has evolved and expanded.”

According to Lim, such expansion indicates that the “level of aggression has escalated.”

“Due to the difficult economy, youths are struggling to find jobs and housing, which are considered prerequisites for marriage,” he said. “The steep competition created ranks among men based on financial abilities, and the insecurity from this gap leads to anger so strong that less successful men are now shooting at anyone, figuratively speaking. You have to be extremely angry to attack someone ‘socially stronger’ than you.”

Lim added that the quick spread of the dishwashing theory in the offline world suggests that a large number of men were already feeling like they were “losers” in society and ready to jump on board with a theory that soothes their frustration.

“I wondered what those men gain by attacking other men and spreading such elaborate claims,” said 27-year-old Lee, an unmarried pharmacist. “I concluded, to people who can’t marry or simply hate women, the idea of a happily married man threatens their rationalization of why they're not married. So they must make married men look pathetic and portray marriage as a loss — almost like brainwashing, since actual married men aren’t even complaining about ‘dishwashing.'”

“Marriage is about supplementing each other in many ways, including financially,” Lee added. “If they think supporting one’s family means being used and are so paranoid about that, I wonder what they think marriage is in the first place. 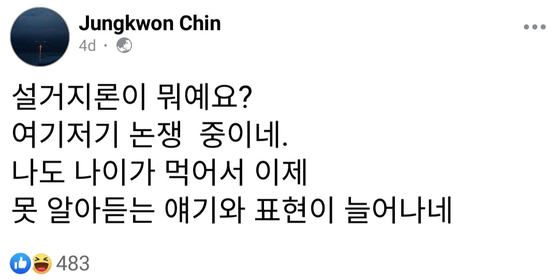 Many point out that the dishwashing theory is innately based on anachronistic “slut-shaming,” as it originates from comparing women to leftover food for having a sexual history. The theory says that women having premarital sex is problematic, and their husbands are victimized by such immoral conduct. Professor Lee said the theory exposes a double standard.

“It has been socially acceptable for men to desire physically attractive women, then seek ‘chaste’ women when it’s time to choose a wife,” she said. “But when women do the same — date physically attractive men and later marry a stable partner — it’s suddenly unethical, and men are some sort of victims who are ‘forced to do the dishes.’”

At the same time, Lee believes the theory goes much deeper than the issue of virginity.

“The idea that women now freely follow their desires makes some men uneasy,” said Lee. “Under the traditional ideal of femininity, women are not supposed to make decisions based on desires or benefits. They’re supposed to be devoted to their husbands unconditionally and take care of them like a mother. It’s actually a very romantic expectation of love, but it’s unrealistic and one-sided. To me, the dishwashing theory is more of a lament that the ideal femininity which many men expected no longer exists in the 21st century. Slut-shaming is just another pretext to degrade women who don’t fit their idea of femininity.”

Experts concurred that the dishwashing theory boils down to one dominant emotion: Anxiety. The worsening economy on top of pre-existing misogyny concocted a theory that attempts to rationalize why less financially stable men are unmarried and better off that way. 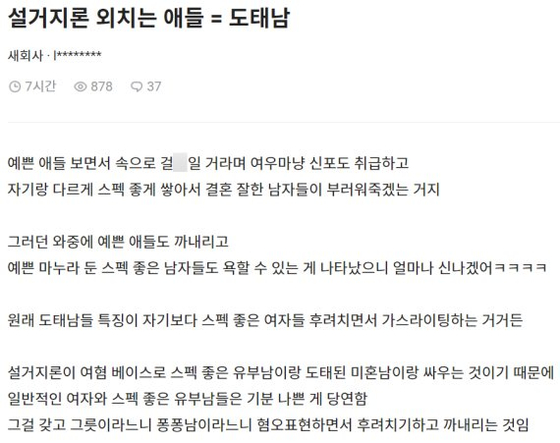 One online post claims that proponents of the dishwashing theory are "losers" in society who are jealous of good-looking women and financially successful men. [SCREEN CAPTURE]


“Koreans live through an endless series of competitions, most notably entering college and getting a job,” said matchmaker Park. “Now that even marriage has become a competition, I’d summarize this whole controversy as jealousy and sorrow. Those who lost in the competition are trying to find flaws in happily married, financially stable men and women.”

“Similar to how misogyny is rooted in men’s insecurities, the same goes for the dishwashing theory,” said Professor Lee. “The theory’s proponents make it seem like they’re looking down upon married men as ‘Pongpong men,’ but they’re actually projecting their anxiety that they will never be able to secure a stable position like those married men.”

Professor Lim emphasized that the target of hate did not shift, but merely expanded.

“It doesn’t mean those men stopped attacking women and moved on to other men,” he said. “It’s just that men are no longer free from verbal attacks from men either. Since people are extremely anxious in these difficult economic times, hate is manifesting in more severe, various forms. Not only is the target expanding, but the wording of hate is also becoming more explicit and aggressive. It’s depressing, but I believe this phenomenon will continue to grow worse.”