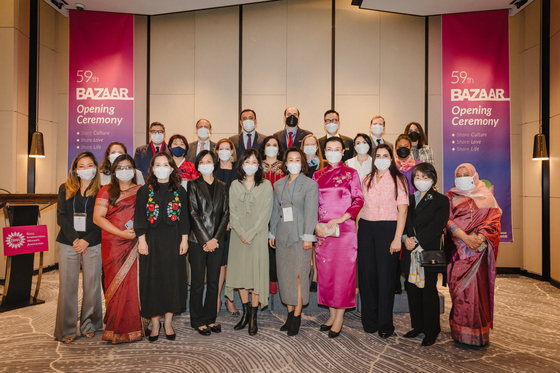 Ambassadors and their spouses of nearly 20 countries including Azerbaijan, Belgium, Georgia, Ghana, Hungary, Nicaragua, Nigeria and Mexico. The spouse of the ambassador of Azerbaijan and representative of Ambassadors Spouses Association of Seoul, Konul Teymurova, third from front right; president of Seoul International Women's Association (SIWA), Veronica Koon, fifth from right, joined by other members; and Song Hyeon-ok, sixth from front right, spouse of the Seoul mayor, celebrate the opening of the 59th SIWA & Diplomatic Community Online Bazaar at the Fairmont Ambassador Hotel in western Seoul on Tuesday. The online bazaar will be open through Nov. 21 and all proceeds will go toward supporting local Korean charities. [SIWA]

Melon Music Awards will be virtual again this year