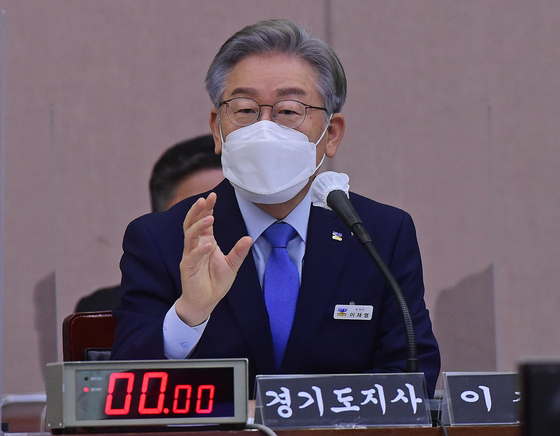 Gyeonggi Governor Lee Jae-myung speaks before the National Assembly's Public Administration and Security Committee during its audit of his government at the Gyeonggi provincial government's office in Suwon, south of Seoul on Oct. 18. [NEWS1]


The Seoul Central District Prosecutors' Office on Monday indicted Yoo Dong-gyu, former head of the Seongnam Development Corporation, for breach of trust and asked for arrest warrants for three other key figures in the Daejang-dong development scandal.

However, a source in the state prosecution service who spoke to the JoongAng Ilbo said that they did not believe the same charge of breach of trust could be applied to Democratic Party (DP) presidential candidate Lee Jae-myung.

A dedicated investigation team that was criticized earlier by legal analysts for seemingly avoiding a probe of Lee Jae-myung while indicting Yoo Dong-kyu for bribery on Oct. 21, added the breach of trust charge against Yoo.

Yoo is a former aide to Lee who worked on his Seongnam mayoral and Gyeonggi gubernatorial campaigns.

The arrest warrants for all three men charged them with committing breach of trust during their involvement in the Daejang-dong development project.

Although controversy over the project’s profit distribution scheme initially focused on the connection between Kim Man-bae, the owner of Hwacheon Daeyu - which reaped a profit of 57.7 billion won on an investment of 49.95 million won in the project – and Lee Jae-myung, whom Kim interviewed as a journalist in 2014 when Lee was Seongnam’s mayor, the scandal has since engulfed both major parties and implicated a wide range of people involved in the project.

The decision by prosecutors to charge Yoo with breach of trust after omitting it from their original indictment Oct. 21 – after initially including it in an arrest warrant request on Oct. 3 – did little to assuage critics who believe candidate Lee should also be charged with breach of trust for setting up the Daejang-dong development, which he touted as providing housing for 5,903 families in the Seoul-Gyeonggi metropolitan area.

Although the Oct. 3 arrest warrant accused Yoo of committing breach of trust under the Special Economic Crimes Act and causing 10 billion won in losses to the Seongnam city government by favoring certain private companies in the profit distribution and shareholder composition of the development consortium, that charge was omitted from the indictment.

Also gone was the accusation that Yoo forced the Seongnam Development Corporation division tasked with drafting the investment contract to delete a clause that would have limited the profits that private investors could reap from the project.

The initial omission of the most politically contentious charges against Yoo led to criticism that prosecutors were trying to avoid implicating Lee in the scandal, with the main opposition People Power Party accusing prosecutors of conducting a politically-biased investigation.

While Lee argued that he set up the Daejang-dong development to feature fixed profit distribution for private sector investors – to prevent them from simply “making money and walking away,” as he claimed was his intention during a parliamentary audit of the Gyeonggi provincial government on Oct. 18 – the stream of allegations of outsized profits raked in by Hwacheon Daeyu and its affiliates have given rise to suspicion the governor also committed breach of trust against the city of Seongnam.

Lawyer Kim Jong-min, who was previously chief of the Suncheon District Prosecutors' Office, suggested that state prosecutors were "trying to avoid [addressing] Gov. Lee Jae-myung's alleged breach of trust," and said that the effect of politics "has never been this explicit since the prosecution service was founded."