Authorities warn cases are expected to spike in near future

Authorities warn cases are expected to spike in near future 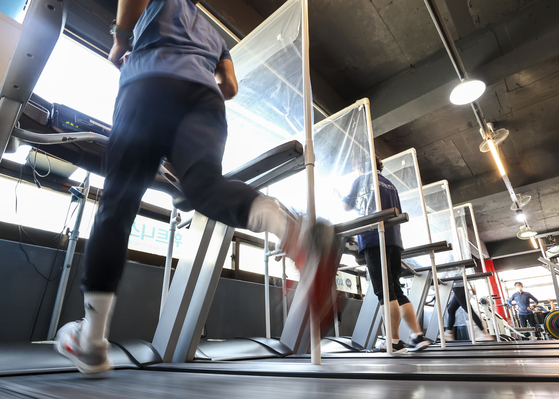 People work out at a gym in Seoul on Tuesday, the second day of the government's newly implemented "With Corona" scheme. A vaccine pass system, which requires visitors to have a vaccination certificate or negative test result, will be also introduced, with a grace period, for entry into high-risk facilities including indoor sports facilities. [YONHAP]


Health authorities warned Tuesday that Covid-19 infections may spike in the following week as a result of the Halloween festivities over the weekend coupled with the newly eased distancing restrictions.

“Virus transmission could increase as there were many meetings and events during the transition to ['With Corona'] and on Halloween,” Son Young-rae, senior epidemiological strategist at the Central Disaster Management Headquarters, told reporters on Tuesday, adding that “such an increase in infections will show up in about a week.”

Son explained, "The Delta variant has become the most dominant strain of virus, which has a shorter incubation period than the original coronavirus."

The Delta variant is known to have an incubation period averaging four days or less, compared with the average six to eight days for the original strain — meaning that infected individuals are contagious sooner.

Son earlier projected infections to “double or triple” following Korea’s transition into its "With Corona" scheme.

According to police on Monday, a total of 1,289 people were caught in violation of anti-virus rules from Oct. 29 to Oct. 31 at Halloween parties and private gatherings across the country.

A restaurant in Gangnam, a downtown area in southern Seoul often populated by young adults, was caught last Saturday for illegally hosting a club-like party, and 234 employees and customers at the place were at the site when police arrived.

Police said central Seoul’s Itaewon, another popular downtown area long known as the international district, was the most visited spot from Friday to Sunday over Halloween.

The number of severely ill patients rose 4 from the previous day to 347, while 16 more virus deaths were added, raising the death toll to 2,874.

Health authorities are especially concerned about infections among unvaccinated people, as major virus curbs on social gatherings and business hours had been mostly lifted with the new “With Corona” protocol that began Monday.

They explained that a fully-vaccinated person will be protected against the virus more than 60 percent of the time, and the preventive rate against hospitalization and death is even higher at over 90 percent — whereas unvaccinated persons have only one-tenth of that protection.

“Under the current scheme aimed at stabilizing the medical system, the number of unvaccinated patients is crucial,” Son said. “If this number increases, it will lead to an increase of severely ill patients and burden the intensive care units.”

Son also repeated other measures, such as the ban on cheering in stadiums and the implementation of “vaccine passes” for high-risk facilities.

Starting this month, stadiums began accepting fans given that they are fully vaccinated or have tested negative within the last 48 hours. Although eating and drinking in the stands is permitted for fully vaccinated people, the authorities still banned cheering due to worries of the virus spreading through droplets.

“Shouting and chanting will produce droplets, and it will reduce the effectiveness of wearing masks,” Son said.

The government also announced that it would implement a vaccine pass, a Covid health pass system similar to those used overseas, for entry into facilities prone to virus transmission, including noraebang (singing rooms), public bathhouses and indoor sports facilities.

In opposition of the vaccine pass system, some employees of indoor sports facilities said they will hold a rally in front of the headquarters of the ruling Democratic Party (DP) in Yeouido, western Seoul, on Wednesday.

Despite the controversy, health officials said adopting the vaccine passport is inevitable to stop the virus from spreading among unvaccinated people, while saying they will consider gradually eradicating the system after monitoring the virus situation. 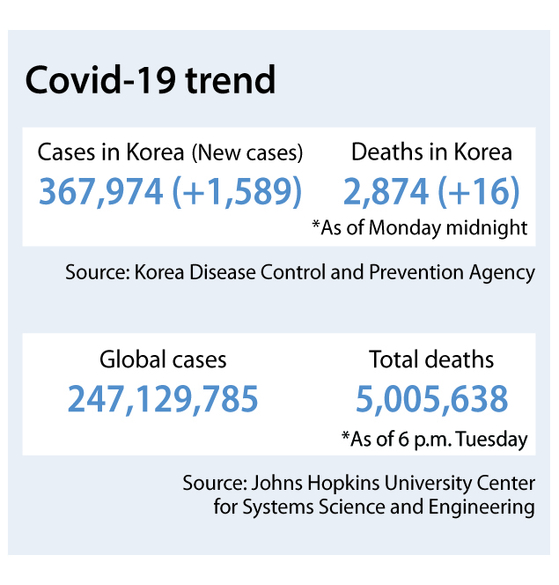 Meanwhile, the government said it is considering announcing the new infections as a weekly average instead of publishing the daily new caseload.

Covid cases usually start to surge in the middle of the week on Wednesdays or Thursdays, as fewer tests are conducted over the weekends which lead to smaller figures in the early weekdays.

“The difference between each day’s figure is too big, so we believe it would be better to present [the new infections] as a seven-day average,” Son said.