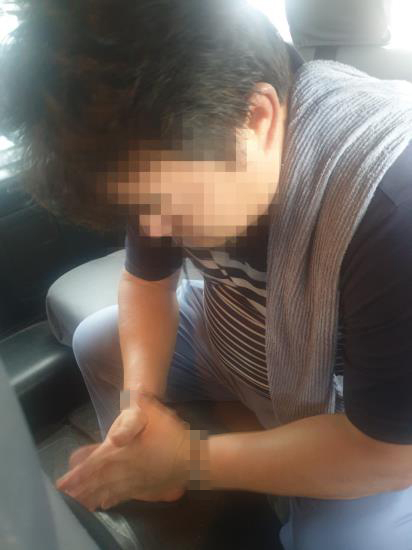 Police in early October arrested a man, only identified by the surname Park, who conducted voice phishing operations from a call center in the Philippines. [YONHAP]

The National Police Agency said Tuesday it will expand international cooperation with foreign criminal investigative authorities and increase the number of police officers dispatched overseas to arrest criminals who fled to China and Southeast Asia.

The agency said it would seek to expand the overseas "Korean desk" or bureau, a rotational station of Korean police officers residing abroad for six months at a time who focus on arresting and repatriating Korean suspects.

It also said Tuesday it submitted a budget for short-term trips by officers to pursue those who have committed cross-border offenses, such as voice phishing or online sex crimes.

The budget recently passed a review by the Finance Ministry and is in the process of waiting for deliberation by the National Assembly's Budget and Accounts Committee.

A police official who spoke to the JoongAng Ilbo on the condition of anonymity said that while the purpose of the six-month missions is to search for and ultimately find criminals who commit crimes in Korea from abroad, they serve the additional purpose of bringing home criminals who have committed offenses, such as fraud, and then fled abroad to evade justice.

The official added that the repatriation of fugitive criminals has long been delayed due to the Covid-19 pandemic and related travel restrictions.

In a first, police in July dispatched one police officer each to China, Vietnam, Thailand and Cambodia for a short-term post. Seven Korean police officers have also been stationed at the overseas Korean desk in the Philippines, where a Korean Incident Department has been establishment.

The police agency’s decision to station Korean police officers in other countries arose from the need to collect intelligence through local Korean communities and coordinate extradition with local public security authorities as the number of overseas escape criminals has increased over the years.

According to lawmaker Kim Yong-pan of the People Power Party, the number of overseas Korean fugitives reached a record high of 943 last year. China was the most popular destination for fleeing suspects with 365 fugitives, followed by the Philippines (201), Thailand (75), Vietnam (59) and the United States (37).

Given the popularity of China as a destination for escaping criminal suspects, Korean police officers will be rotated not only in Beijing, but also stationed on a short-term basis in Shenyang in northern China and Qingdao, Shandong Peninsula, both home to large expatriate Korean communities.

While the number of repatriations of escaped suspects back to Korea as of September has already exceeded last year's number of 271 cases, police officials hope that the longer residencies of dispatched officers will build connections to local authorities and Korean communities to add to the ease of apprehending overseas criminals.

According to the Ministry of Justice's "2020 Legal Yearbook," the number of cases where criminal justice assistance was requested overseas by South Korea last year was 420, up 12 percent from 375 in 2019. Compared to 2016, the figure has increased by 90 percent, suggesting that Korean authorities’ reliance on overseas cooperation may continue to increase.