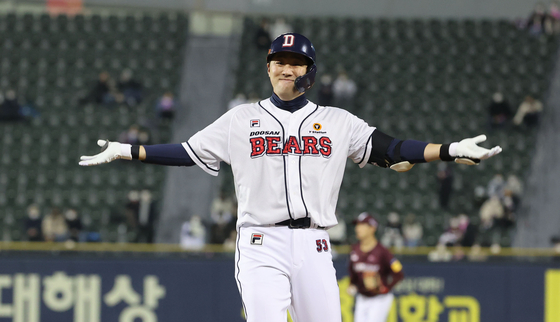 Yang Suk-hwan of the Doosan Bears celebrates after driving in two runs in the fourth inning of a Wildcard game against the Kiwoom Heroes at Jamsil Baseball Stadium in southern Seoul on Tuesday. [NEWS1]


The Doosan Bears will advance to the playoffs proper for a seventh consecutive year after beating the Kiwoom Heroes 16-8 in the second game of the Wildcard Series on Tuesday.

Doosan strung together 20 hits for the win in the high-scoring game at Jamsil Baseball Stadium in southern Seoul to advance to the first round of the playoffs starting Thursday. The Heroes head home empty-handed.

Having finished the regular season in fifth place, the Heroes entered the two-game Wildcard Series with a one game deficit, meaning even a draw in the first game would have won in for the fourth-place Bears.

But the Heroes held their own in the first game on Monday, scoring three runs at the top of the ninth to take a late 7-4 lead and force the series to a second game. That win leveled the playing field, meaning whoever won on Tuesday advanced to the playoffs.

The Bears took an early lead in the second game, scoring two runs in both the first and second innings to pull ahead 4-0.

Kiwoom got on the board with a single run at top of the fourth, but the Bears added five more at the bottom of the inning to jump ahead 9-1.

The Heroes responded immediately, scoring three at the top of the fifth to narrow the gap to 9-4, only for the Bears to score a huge six runs in the sixth to jump up 15-4.

The Bears added one more in the seventh and Kiwoom added three more in the eighth, taking the score to 16-7 going into the last two innings.

Kiwoom were able to get one more at the top of the ninth but could do little to chip away at the huge deficit. 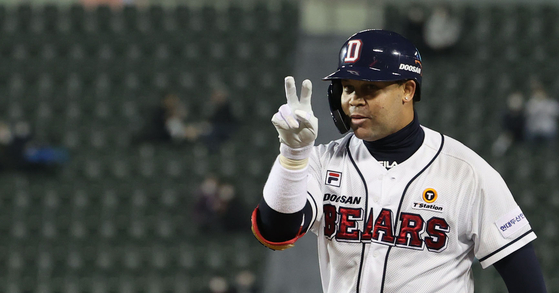 Jose Fernandez of the Doosan Bears celebrates after driving in two runs in the second inning of a Wildcard game against the Kiwoom Heroes at Jamsil Baseball Stadium in southern Seoul on Tuesday. [YONHAP]


The Bears also did it without hitting a single home run, with every single member of the starting lineup crossing the plate at least once.

Doosan will now advance to the postseason proper where they will face Jamsil rivals the LG Twins in the best-of-three first round of the playoffs starting Thursday.

While Tuesday’s win looks impressive for the Bears on paper, it actually marks the start of what is set to be their most difficult postseason journey for the best part of a decade.

Doosan have qualified for the postseason for the last seven years but have never once had to compete in the Wildcard Series.

Since 2015, the Bears have either advanced straight to the Korean Series or fought their way there, competing in the championship tournament for six consecutive years and winning three.

For the Seoul club to repeat that success story again this year, they will have to battle through the first and second rounds of playoffs first, beating both the Twins and Samsung Lions along the way in order to earn a chance to face the KT Wiz for the title.

The first round of the playoffs will begin at 6:30 p.m. on Thursday, with the second game on Friday. If needed, a third game will be played on Sunday. All games will be played at Jamsil.