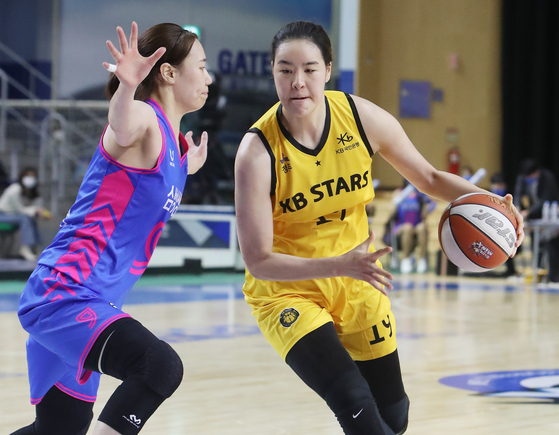 Park Ji-su of the KB Stars, right, drives past an opponent at a match against the Yongin Samsung Life Blueminx on Sunday at Yongin Gymnasium in Yongin, Gyeonggi. [YONHAP]


The KB Stars have won every single game since the 2021-22 Women’s Korean Basketball League (WKBL) season began a week ago, starting off the new campaign with a dominant three-game streak.

The WKBL season kicked off on Oct. 24 with the six women's basketball teams vying for the regular season trophy.

Four teams have played at least the first three matches and the KB Stars are sitting pretty at the top of the standings. The Cheongju team faced defending champion Yongin Samsung Life Blueminx in the very first match of the season on Oct. 24 and took a 68-69 victory, going on to win their next two matches against Shinhan Bank 74-71 on Friday and Bucheon Hana 1Q Woman's Basketball Team 92-75 on Sunday.

The KB Stars and the Blueminx have some potent recent history, having faced each other in last season's championship. The Blueminx beat the Stars 3-2, winning the third game 74-57 to win their first championship title since 2006 and marking the first time in WKBL history that a club that finished fourth in the regular season had gone on to win the championship title. 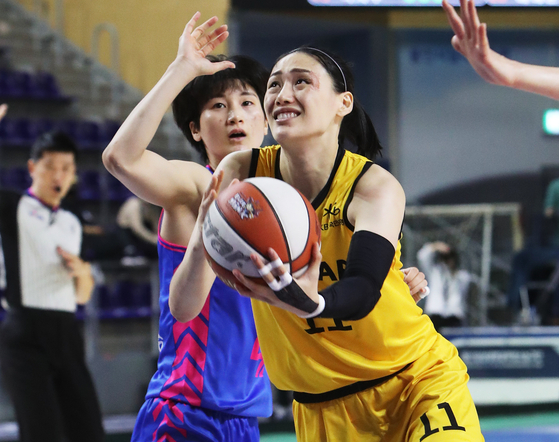 Kang Lee-seul of the KB Stars tries for a shot at a match against the Samsung Life Blueminx on Sunday at Yongin Gymnasium in Yongin, Gyeonggi. [YONHAP]


This season, KB Stars acquired Kang Lee-seul, Olympian and WKBL veteran, in hopes that the addition would combine with ace Park Ji-su. Kang debuted in the WKBL with Hana 1Q in 2012 and after playing for the Bucheon side for a decade, acquired free agent status and transferred to the KB Stars.

On Sunday, Kang came on the court for 22 minutes and 41 seconds to face her old team and scored nine points, five rebounds and three assists for KB Stars.

The KB Stars have a big showdown ahead on Thursday, when they face last season's regular season champion, Woori Bank Wibee.

The Wibees are the winningest team in WKBL history, but slipped last year after winning the regular season title by losing to the Samsung Life Blueminx in the playoffs. As of press time, the Wibees are second in the WKBL standings with two wins.