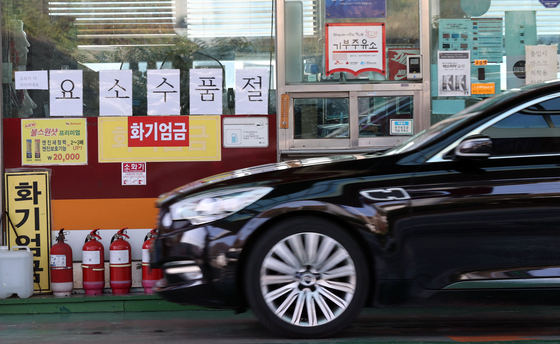 Signs reading ″Diesel Exhaust Fluid is Out of Stock″ at a gas station in Siheung, Gyeonggi on Wednesday. [YONHAP]


Owners of diesel cars and trucks are suffering from a shortage of diesel exhaust fluid (DEF), an essential product that cuts emissions.

China tightened its exports of fertilizers, including urea, the main ingredient in DEF. Of all urea consumed in Korea last year, more than 60 percent came from China.

On online secondhand markets like Danggeun Market, 10 liters of DEF are being sold for 100,000 won.

Diesel-powered passenger cars and trucks that were released after Jan. 2015 are equipped with a Selective Catalytic Reduction (SCR) system, which is designed to reduce nitrogen oxide emissions. Cars with the SCR system require DEF, which is injected into the exhaust stream of the vehicles, and stored in a reservoir separate from the fuel tank to help convert nitrogen oxide into nitrogen and water.

Diesel vehicle owners need to fill their DEF reservoirs regularly. The absence of DEF might cause a breakdown of equipment or a failure in the engine fuel system. Owners can fill reservoirs in gas stations, or purchase the fluid in auto part stores, discount marts or e-commerce sites and do the process themselves.

“It may take one week or one month or longer to secure DEF. There is currently no hard plan,” said an employee for an auto parts maker in Seoul. “We, too, are so frustrated.”

The good news is that diesel passenger cars can drive over 10,000 kilometers (6,200 miles) on 10 liters of DEF. But trucks can only run 300 to 400 kilometers, so truck owners are being hurt the hardest.

Of 3.3 million diesel-powered trucks in Korea, 2.2 million, or around 60 percent, need DEF to operate, according to industry sources. Many are concerned that the shortage of DEF could cause a disruption in Korea's supply chain.

“Before, gas stations used to give DEF for free as gift when I refueled my truck,” said 53-year-old Mr. Park, who hauls cargo for a logistics company. “But now I can't find gas stations that have DEF. The price of diesel fuel has been on the rise, but I have to worry more about the soaring prices of DEF.”

The shortage of DEF is likely to continue for a while as Korea is highly dependent on imports.

On Tuesday, the Office for Government Policy Coordination held a meeting with related governmental departments including the Ministry of Economy and Finance and Ministry of Environment to discuss the situation and come up with some solutions.

The government said it would ask the Chinese government to ease the regulations on exports, and talk with other urea-exporting countries like Russia.

The government also said it will review a plan to allow companies to use technical-grade urea from the industrial sector to make DEF.

“We will take a close look at the global trends of imports and exports of urea and will exert all efforts to come up with measures that can stabilize the DEF market in Korea,” said a spokesperson for the Office for Government Policy Coordination.