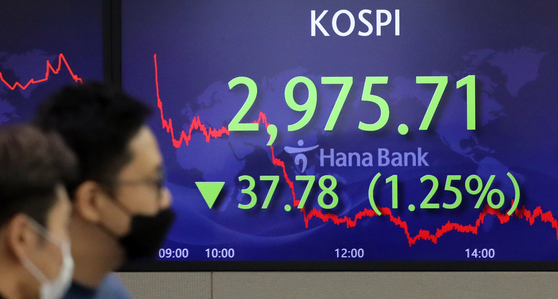 A screen at Hana Bank's trading room in central Seoul shows the Kospi closing at 2,975.71 points on Wednesday, down 37.78 points, or 1.25 percent, from the previous trading day. [YONHAP]


Stocks declined more than 1 percent Wednesday as investors seek clues on the timeline for the tapering with the U.S. Federal Reserve meeting this week in focus. The won fell against the dollar.

The key stock index retreated as investors took to the sidelines on expectations that the Fed may hasten its timeline for potential rate hikes to vent the rising inflation pressure.

The Fed is set to reveal its meeting results Wednesday.

A slump in techs, chemicals and autos led the overall market decline.

Kakao Pay, the mobile payment service arm of Kakao, closed at 193,000 won on its first day of trading, more than doubling its initial public offering price of 90,000 won.

The local currency closed at 1,181.6 won against the dollar, up 7.2 won from the previous session's close.