Lotte's retail strategy is all over the place

Lotte's retail strategy is all over the place 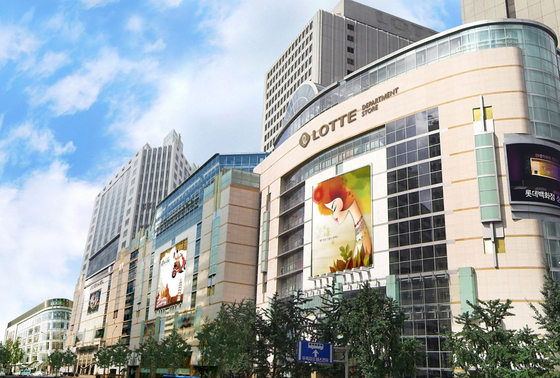 
Lotte Group employees are scrambling for the exits as the company struggles to keep up in the e-commerce era.

Lotte Department Store offered early retirement packages to employees who have been behind the tills for 20 years or more — numbering about 2,000 — and they had to apply by Oct. 8.

At the time, a Lotte Department Store manager told the JoongAng Ilbo that “around 5 percent are expected to sign up, since the compensation is not that bad.” In fact, some 500 applied — 25 percent of the people eligible.

Both Lotte Mart and Lotte Department Store are run by Lotte Shopping.

“It’s startling to see co-workers whom I’ve worked with for a long time sign up [for early retirement],” said an employee at Lotte Mart. “I'm having mixed feelings because they’re probably taking the chance to leave when they can get extra compensation [from the retirement package].”

Lotte is struggling to adapt to the era of online shopping.

In March 2019, rival Shinsegae launched SSG.com, an online shopping website that oversees its subsidiaries Emart, Shisegae Department Store, No Brand and others. All Shinsegae Group products were on one website, and the companies could offer joint promotions.

Lotte started a similar e-commerce site Lotte On in April 2020 — a year later.

Emart and Lotte Shopping competed to acquire eBay Korea, but Emart won. With that acquisition, Shinsegae now has the second largest e-commerce market share in Korea, 15 percent. Naver has 18 percent and Coupang 13 percent.

Lotte Shopping is far behind with 5 percent.

Lotte Shopping reported revenues of 7.8 trillion won ($6.6 billion) in the Jan-June period, down 4.2 percent on year. It suffered a net loss of 75.1 billion won, a 222.6 percent improvement over the year earlier's net loss of 242.3 billion won.

Meanwhile, Emart's revenue rose 13 percent to 5.9 trillion won in the first half and net profit rose 53.6 percent to 483 billion won.

Sales from Lotte Shopping's e-commerce division — which includes Lotte On and health and beauty store Lohbs — fell 29.2 percent on year to 56 billion won in the first half. It's operating loss increased 38.6 percent from 44 billion won last year to 61 billion won.

Lotte Mart sales fell 7.5 percent on year to 2.9 trillion won in the first half. Its operating loss was 25 billion won, a 51 percent improvement from a loss of 51 billion won a year ago.

Department stores were a bright spot. Lotte Department Store sales in the first half were 1.4 trillion won, up 9.8 percent on year. Operating profit rose 127.7 percent to 164.7 billion won.

Lotte shut 12 Lotte Mart branches last year to put more focus online. But its plans this year have suddenly changed. The company announced it will increase the number of VIC Market branches — big warehouse-style discount stores — to 20 by 2023. It currently operates two branches.

“I seems like the company is looking at Emart’s warehouse-style discount store Emart Traders and Shinsegae’s [liquor shop] Wine & More as factors that drive growth,” said an executive working in retail. “It failed to follow its plans to focus on e-commerce and changed its strategy multiple times, which eventually resulted in nothing.”

Sul Do-won, a professor of business at Yonsei University’s Graduate School of Business, said the company need to find its own unique retail strategy.

“Lotte is based on many offline channels, and it will be best for the company to come up with a new strategy that combines offline and online services rather than just following other e-commerce companies,” said Sul. “It’s important that it find ways to provide fun experiences for customers offline, something people can’t enjoy when doing online shopping.”