Salted cabbages are the craze ahead of kimjang

Salted cabbages are the craze ahead of kimjang 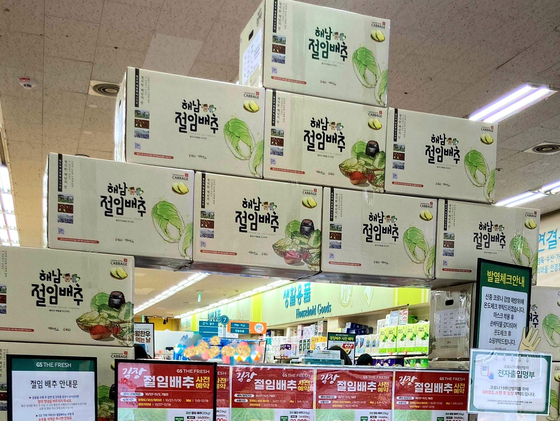 
Retailers are boosting their stocks of salted cabbage as demand rises ahead of kimjang, or kimchi-making season in Korea.

Discount marts started taking orders for salted cabbage in advance of kimjang season and customers were allowed to choose a date to collect them.

Salted cabbage is being preferred by customers because they are cheaper than regular cabbages and reduce the kimjang process.

Lotte Mart said it increased its supply of salted cabbage available for advance orders by 125 percent compared to last year, a total of 450 tons. Twenty kilograms (44 pounds) are being offered for 35,900 won ($30), down two percent from 36,800 won last year.

Lotte said that various factors like the sudden cold weather in October and the rotting of cabbage roots due to high temperatures and humidity pushed the cabbage price up this year.

Emart has also expanded its salted cabbage supply to 35,000 boxes this year from 10,000 boxes last year.

Last year, all 10,000 boxes of salted cabbages were sold out in three days.

Twenty kilograms of salted cabbages are offered for 37,300 won or 42,300 won, depending on the type of cabbage.

The average retail price of cabbage on Wednesday was 8,600 won per 10 kilograms, according to data from the Seoul Agro-Fisheries & Food Corporation. That was up 23 percent compared to last week, and 52 percent from the same period last year.

“Sales of salted cabbage have jumped 11 percent annually over the past five years,” said GS Supermarket in a statement. “Sales generated from salted cabbage exceeded that of the actual cabbages in 2016, and the sales gap has been increasing since.”