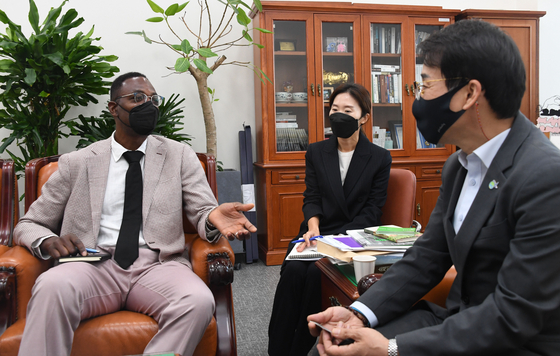 Dean Garfield, vice president of public policy at Netflix, speaks with Lee Won-wook, chairman of the parliament’s Science, ICT, Broadcasting and Communications Committee, on Wednesday at the National Assembly in southern Seoul, on the ongoing issue of network usage fees. [JOONGANG ILBO]


Facing an expensive and open-ended obligation, and possibly a legal quagmire, Netflix pitched Korea an idea. With a twist.

Dean Garfield, the streaming company’s vice president of public policy, told National Assembly legislators Wednesday that Netflix was willing to offer various odds and ends to help out in lieu of actually covering the costs of the bandwidth that is being eaten up by its highly popular shows.

Details are vague, as no transcripts were provided, and legislators interviewed recalled what was said from memory. But it was clear that Netflix wasn’t ready to give in to demands being made by Korean companies and by the Korean government.

The gambit from the Las Gatos, California-based streamer included partnerships with local companies providing access to its wildly popular shows. It has also offered to share more with Korean production companies that have worked on hit Netflix originals, such as “Squid Game.”

Garfield set the tone for the discussion in a post uploaded on Netflix’s website on Oct. 24, writing that “The next 'Squid Game' depends on a free and open internet.”

Netflix is in a legal battle with SK Broadband after refusing to entertain network usage fees that other online services pay to cover the cost of traffic their customers generate.

It filed suit in April 2020 and lost, but appealed immediately. SK Broadband countersued on Sept. 30.

Garfield visited the National Assembly and met with the members of the Science, ICT, Broadcasting and Communications Committee to discuss Netflix’s ongoing feud with local internet providers over network usage fees.

They were chairman Lee Won-wook and Rep. Kim Yeung-shik of the ruling Democratic Party. 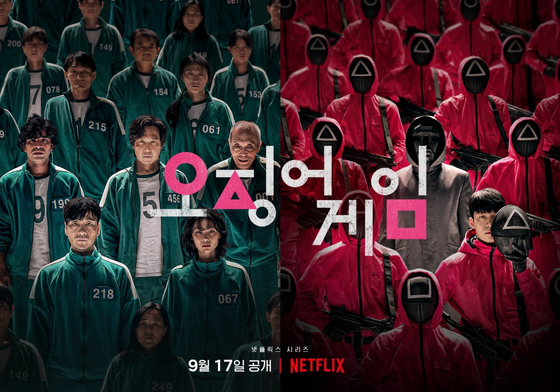 
According to Rep. Kim’s office, Garfield argued that Netflix is not entirely refusing to share network maintenance costs of the internet service providers (ISP), but is looking for other ways such as "technical partnerships," instead of paying in cash.

Netflix’s vice president met with Kim Hyun, the vice chairperson of the Korea Communications Commission (KCC), on Tuesday. The meeting was held at Netflix’s request, according to the KCC.

During the meeting, Kim quoted President Moon Jae-in, who said on Oct. 18 that “global platforms need to take responsibility corresponding to their scale.”

“It is crucial that all constituents of the media field, including creators and producers, need to cooperate to ensure sustainable growth, and we hope that Netflix leads the way as a global media platform company,” Kim said.

Garfield promised that Netflix will make more investments in Korea, according to the KCC. Netflix invested 770 billion won ($651.8 million) in the market from 2016 to 2020.

Critics have pointed out that Netflix did not pay the local production company of “Squid Game” any additional money despite the immense revenue generated by the series.

Garfield did say during Wednesday’s talk with Rep. Kim  that Netflix is in talks with the local production company to share more of the fruits of the drama’s success.

Netflix typically pays a production company upfront and neither shares the profit nor requires the company to cover any losses.

“We are doing our part to ensure Netflix isn’t a burden on Korean broadband companies,” Garfield said in his Oct. 24 post.

“Working with companies like Samsung and Cisco in the Alliance for Open Media, we built a content delivery network called Open Connect, which we offer free-of-charge to internet service providers around the world. It enables Netflix content to be stored as close to our members as possible, and avoids clogging up the internet,” he wrote.

Netflix refused to comment further on Garfield’s visit to Korea, but the company will hold a press conference on Thursday.