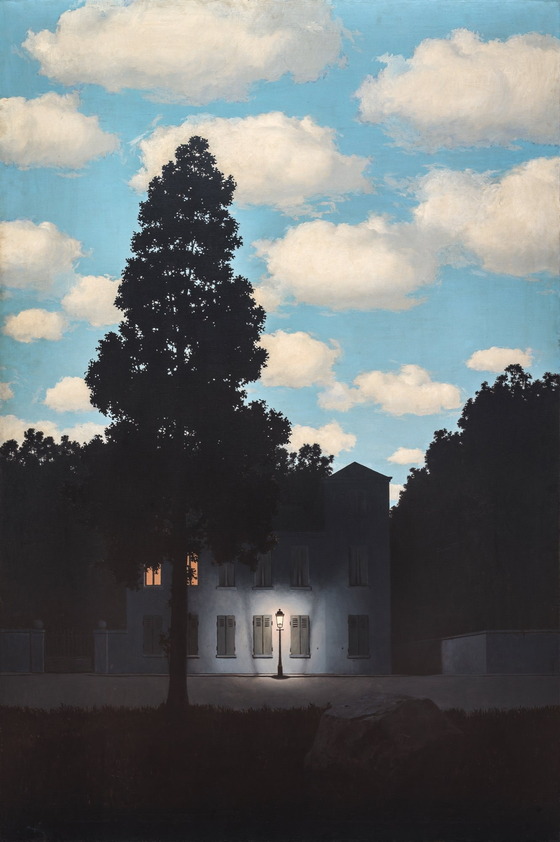 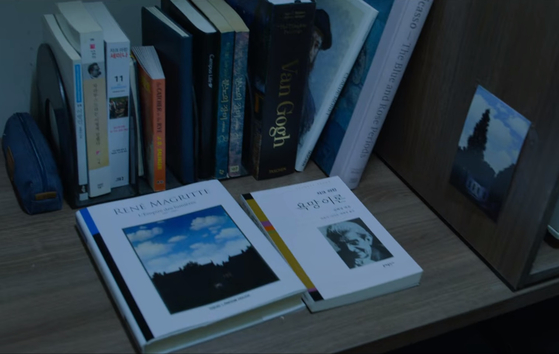 The images seen from the desk of a policeman’s missing brother show “The Empire of Light” by Rene Magritte. [NETFLIX]


The artistic mise-en-scène, or stage design and arrangement of actors in scenes, in the Netflix series “Squid Game” has contributed much to its worldwide success, according to both film critics and audiences.

The impressive art of the series is inspired by renowned artists' works such a painting by the Belgian Surrealist Rene Magritte (1898-1967) and prints by Dutch graphic artist M.C. Escher (1898-1972), according to director Hwang Dong-hyuk and art director Chae Kyoung-sun. In addition, foreign fans of the series are finding more scenes that appear to have roots in famous works in art history.

What drew the missing brother to this particular painting? Later on in the series, it is revealed that the brother is actually the 'Front Man' in charge of the operations of the games, in which people compete to survive and for prize money of 45.6 billion won ($38.6 million). The brother, who was once a policeman, won the games several years prior and has now become the person who supervises the process.

Does the painting "The Empire of Light" appear to foreshadow these things? When asked this question, Director Hwang said, “We cannot tell if the painting is a nightscape or a landscape of the daytime. Under the clear sky, full of daylight, is the land of a nightscape. This is a view about our world by the 'Front Man' and a symbol of his mental state.”

The upper half of the artwork shows a blue sky with some floating clouds while the house on the ground in the lower half shows its façade in darkness. It might suggest that the Front Man believes many marginalized people are left in the dark although people try — or pretend to try — to lighten the world with fairness and equality. Or, he might have found the painting similar to what’s hidden in the human self. Just like the theory of inherent evil inside every human being, the house, no matter how bright it is illuminated by the clear sky, still remains surrounded in darkness.

Many international fans of "Squid Game" have shared their interpretations about why "The Empire of Light" appears in the series. Some say it serves as a representation of the Front Man, who has both good and evil sides. Others say the painting symbolizes that he might have come to doubt what he previously believed to be the light and dark in society. Based on such theories, some propose the hypothesis that the Front Man might be a spy who actually wants to dismantle the games, or that this was once his goal, but he has since become fascinated by and supports them.

In the show, the Front Man says, "Everyone is equal while they play this game. Here, the players get to play a fair game under the same conditions. Those people suffered from inequality and discrimination out in the world and we’re giving them a last chance to fight fair and win."


This quote may sound reasonable, but it is actually a paradox. The chance of players failing is inordinately high and the price they have to pay once they fail is death. Therefore, only those pushed to the very edge choose to take a chance to play the game “voluntarily.”

The rules of the game are not very fair, either. It allows violence and alliances to be formed, which are disadvantageous to the weaker players, for the ultimate enjoyment of the audience, or so-called VIPs.

In fact, the game that is promoted to provide a better alternative to a cruel reality, can actually be described by one word — unfair.

A paradox, which seems to have valid reasoning in part but leads to a self-contradictory conclusion, is the characteristic of not only the brutal game, but also the painting "Empire of Light," that seems to be normal in part but is contradictory and grotesque as a whole.

Tying an item with a paradoxical environment, such as the combination of the day and night in "The Empire of Light," is called dépaysement, which is often seen in pieces by Surrealist artists. And such technique is also seen throughout “Squid Game.”


“Since 'Squid Game' specifically revolves around Korean children's games, our first goal was to create a childlike and fairy tale-like atmosphere, so it wasn’t a matter of intentionally inserting disturbing and creepy details, but adding movie props that viewers would not expect to see in a thriller where deadly games are being played, like bright, vivid colors or the gift-wrapped coffins,” said art director Chae in an interview with the Korea JoongAng Daily. The paradoxical combination of the bloody death game and the fairy-tale-like spaces can be considered to be a kind of dépaysement. Accordingly, we can say that the entirety of the mise-en-scène of "Squid Game" has similarities to Surrealist paintings by Magritte.

According to director Hwang, the maze-like stairs in the series was inspired by works from famed Dutch artist Escher, including "Relativity." Escher's images of spaces that are impossible to create in reality and are visualized with the help of artistic techniques and mathematical understanding not only offered inspiration to Hwang but also to movie directors such as Christopher Nolan, who put a staircase inspired by Escher's print "Ascending and Descending" in his 2010 movie “Inception.” Furthermore, Escher has also inspired scientists and mathematicians, including last year's Nobel Prize in Physics winner, Roger Penrose.

A scene showing a player screaming, left, in “Squid Game,” has been compared to Edvard Munch’s “The Scream” (1893). [NETFLIX, THE NATIONAL GALLERY OF NORWAY]

A scene of the last three players having dinner, left, has reminded some audiences of Judy Chicago’s “The Dinner Party” (1974-9). [NETFLIX, THE BROOKLYN MUSEUM]


Another scene has been compared to "The Scream" by Norwegian artist Edvard Munch (1863-1944). The scene from the first game "Red Light, Green Light" in Episode 1, shows one contestant with her face covered with the blood of another player, screaming with both of her hands on the sides of her face.

Netizens have also pointed out comparisons between scenes in Episode 8, in which the last three contestants are served dinner at a triangle-shaped table, with "The Dinner Party," an iconic feminist work by American artist Judy Chicago.

While it has not been confirmed whether such fan theories were intended by the director or artistic director, audiences have been enjoying uncovering the many layers that the mise-en-scène of "Squid Game" has to offer.