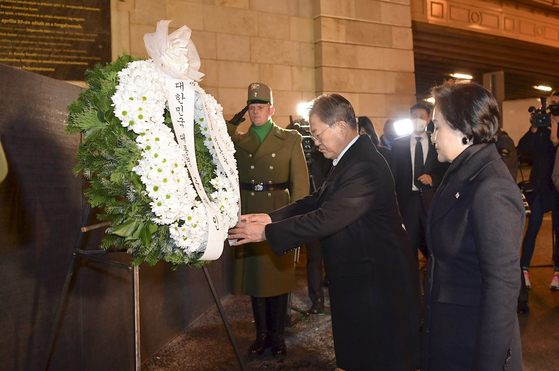 President Moon Jae-in, accompanied by first lady Kim Jung-sook, pays his respects at a memorial commemorating victims of the deadly ferry sinking in Budapest in 2019, kicking off his three-day state trip to Hungary late Tuesday. [YONHAP]


President Moon Jae-in kicked off his three-day state trip to Hungary late Tuesday, which includes bilateral talks with the Hungarian president and a meeting with the Visegrad Group (V4) to bolster economic cooperation with Central Europe.

The visit to Budapest, the last leg of his Europe tour, comes as Moon urged solidarity to tackle the global supply chain crisis on the sidelines of the G20 summit in Rome Sunday.

This marks the first visit by a Korean president to Hungary since a trip by late President Kim Dae-jung in 2001.

Moon on Tuesday paid tribute at a memorial erected by Hungary last year commemorating those who were killed in the deadly ferry sinking in Budapest in 2019.

On May 29, 2019, the Hableany ferry capsized on the Danube River, near Margaret Bridge, after being hit by a larger vessel, killing 26 Korean tourists, including one who is still missing, and two Hungarian crew members.

"I am grateful to the Hungarian government for doing its best in the search and rescue for the missing people from the ferry accident," said Moon at the memorial. "I give my condolences to the Koreans and the two Hungarians. The Korean people will never forget that the Hungarians gathered together in condolences on the first and second anniversaries [of the sinking]. It will lead to continuous friendship between our two peoples in the future."

Accompanied by first lady Kim Jung-sook, Moon expressed his gratitude to Hungary for creating a memorial to allow for "eternal mourning" for the victims.

Hungary was the first country in the Eastern bloc to establish diplomatic ties with Korea in February 1989 during the Roh Tae-woo administration. 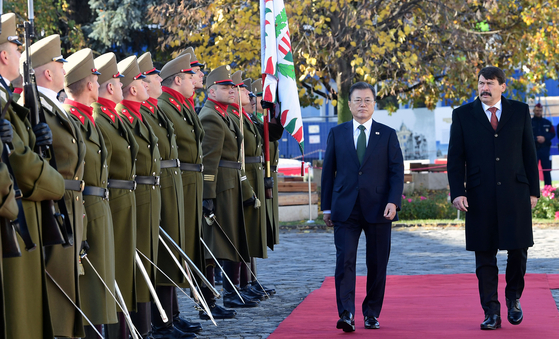 President Moon Jae-in, left, and Hungarian President Janos Ader are greeted by an honor guard in Budapest, Hungary, ahead of their bilateral talks Wednesday. [YONHAP]

Moon will also attend a business forum with the V4, a political alliance of the four Central European states: Hungary, Poland, the Czech Republic and Slovakia. On Thursday, Moon will hold a summit with the V4 prime ministers, the second of its kind, in Budapest.

The V4 is the second-largest market in Europe, and Moon's visit is expected to help Korean companies enter the European market in the fields of electric vehicles (EVs) and batteries. Korean business leaders like SK Chairman Chey Tae-won will attend the V4 business forum.

The V4 is Korea's largest export market in the European Union for Korea. The group is also a production base in Europe that Korean automobile, home appliance and battery-related companies are intensively seeking out. Of 152 production subsidiaries of Korean companies in Europe, 136 are in V4 countries. The V4 countries are also a key investment destination for over 650 Korean companies.

Thus, the Blue House sees this visit to serve as an opportunity to expand cooperation in key industries such as EVs and batteries.

A senior Blue House official said, "President Moon's visit to Hungary will provide an opportunity to strengthen supply chain cooperation in key areas such as infrastructure and new industries including batteries, digital and biotechnology."

Korea's Defense Acquisition Program Administration is also expected to seek for ways to bolster defense cooperation with the V4 countries.

Hungary is the last leg of Moon's nine-day, three-country trip to Europe which kicked off last Thursday and took him to Italy for a meeting with Pope Francis at the Vatican and the G20 summit and Britain for the COP26 climate conference.

Moon in his address at an event hosted by U.S. President Joe Biden on global supply chain resilience on Sunday said, "An open and fair trade order must be reinstated so that businesses can establish more close-knit supply chains through free trade and investment."

He urged to find solutions for problems triggered by Covid-19 through "solidarity, cooperation and multilateralism" and to seek for ways to restore stable supply chains and "accelerate a complete global economic recovery."

Korea has responded to the logistics emergency by deploying temporary ships and planes and supplying new containers, he added.

Moon was the first leader to speak after Biden's opening remarks at the supply chain meeting attended by 14 American allies, and his seat was also directly next to that of the U.S. president.

Moon had a brief pull-aside meeting with Biden at the G20 summit Friday. Both Moon and Biden had met with Pope Francis earlier that day.

New Japanese Prime Minister Fumio Kishida attended the 26th United Nations Climate Change Conference (COP26), in Glasgow, Scotland, his first overseas trip since taking office early last month. Kishida and Biden held their first bilateral meeting on the sidelines of the COP26 summit Tuesday. Moon and Kishida, however, did not hold a first meeting on the sidelines of the climate gathering.

In Glasgow, Korea became a signatory to the global pact pledging to cut methane emissions by 30 percent by 2030. Moon attended the ceremony for the Global Methane Pledge with other world leaders on Tuesday.