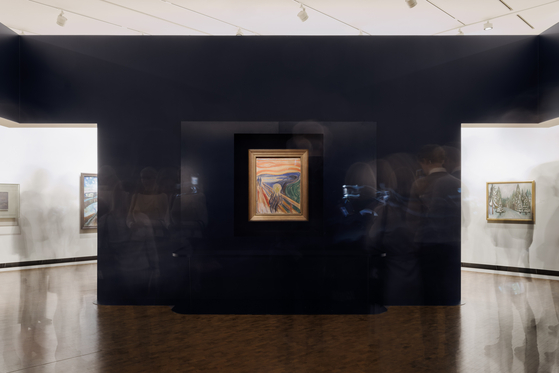 ″The Scream″ (1893) by Edvard Munch is displayed at Munch, the new museum in Oslo dedicated to the Norwegian artist. [MUNCH MUSEUM/EINAR ASLAKSEN]


The new Munch museum in Oslo, Norway, is hoping to bring an exhibition to Seoul soon, according to director Stein Olav Henrichsen.

“We know a lot of people in Korea are interested in Munch,” said Henrichsen, speaking with a group of reporters at the Norwegian Embassy in Seoul on Monday. “We are thinking right now about having an exhibition in Korea within two to three years.”

The museum is now five times the size of its older version, with 11 of its 13 floors dedicated to exhibitions. Over half of Munch’s known works, including his "The Scream" collection, have been transported from the old museum to the new, which now houses around 26,700 paintings, drawings, photos and even films made by Munch from 1873 to 1944.

The old Munch museum, built in 1963, was located farther inland. After years of discussing the possibility of building a new museum dedicated to Munch, the Oslo city government in 2016 finally gave the go to build the museum near the water, looking out to the Oslo Fjord and next to the iconic Oslo Opera House. Many international architects pitched their bids to build the museum, and Juan Herreros, a Spanish architect, was selected.

It took years of planning and convincing — the cost of building the new museum was estimated by the Oslo city council to be around 2.7 billion Norwegian kroner ($324 million) — and the unveiling last month showcased a massive facility dedicated to a single artist.

“We have his working tools, his library, his lithographic stones, his pencils — a lot of items from his home and his life are also part of the collection,” Henrichsen said. “We also have 14,000 pieces of texts he wrote — Munch wrote throughout his whole life — all digitalized so you can see it on our homepage. [You have to remember,] Munch was an artist for 65 years.”

The museum also holds several cafes and restaurants, one of the largest libraries dedicated to art in the Nordic region, and a rooftop terrace.

“If you are visiting from Korea, you really need to spend some time in the museum because you cannot visit all exhibitions at once,” he said. “Forget everything you know about museums; this is totally different.”

The last time some of Munch’s works made it to Korea was in 2014, when nearly 100 of his drawings and paintings were on display at the Seoul Arts Center. “The Scream” paintings in oil, tempera and crayon could not travel to Seoul at the time, and only a lithographic print version was exhibited.

Henrichsen said details on the upcoming exhibition are being discussed, including which of Munch’s works may be traveling to Seoul.

To hear more about the latest efforts to bring Munch to Korea and some of the ideas that went into the design of the new museum, the Korea JoongAng Daily and a group of reporters sat down at the Norwegian Embassy with Henrichsen, who joined the meeting virtually. The following are edited excerpts of the conversation. 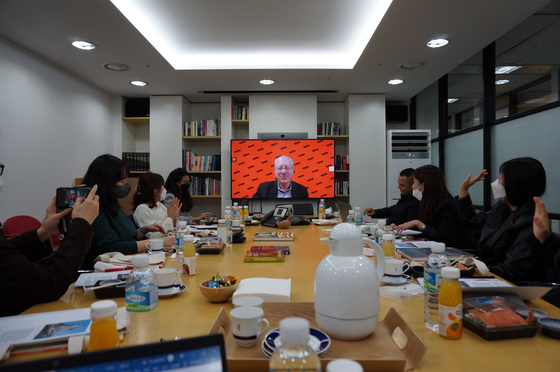 Director Stein Olav Henrichsen of the Munch museum speaks with the press at the Norwegian Embassy in Seoul on Monday. [ESTHER CHUNG]

Munch currently holds around 26,700 works by the artist. How was Norway able to keep the collection together over the years?
Edvard sold a lot of his art works when he was young because he needed the money to finance his life, his sisters and [family]. But later on, he didn’t sell his works very much. He kept everything himself; that is why we [were able to] have the total production in our museum. Most people know that Munch was dealing with more challenging and difficult aspects of life — we know his “Scream,” we know his “Melancholy” […] but Munch was also concerned with all kinds of aspects of life […] and [by visiting,] you gain insight into the depth and breadth of Munch’s collection.


How are “The Scream” pieces by Munch being exhibited at the new museum?
We are exhibiting three of "The Screams" in a sequence, so you can see them at once. But there are also a lot of his works that are famous in Norway and other countries that are not as recognized as "The Scream," “Madonna,” […] “Galloping Horse” and “Starry Night.” Part of our strategy [is] to make the whole production more available to the rest of the world and to our local population, and the new museum makes this possible.


What’s the latest on bringing some of Munch’s works to Korea?
We haven’t set the date, but we are now discussing to decide on an organizer [to bring an exhibition to Korea]. We have specific plans, and quite soon we will go public with them. […] It was really wonderful to have an exhibition in South Korea [in 2014]. As many as 250,000 people came, and we were really happy with that — we really want to come back. 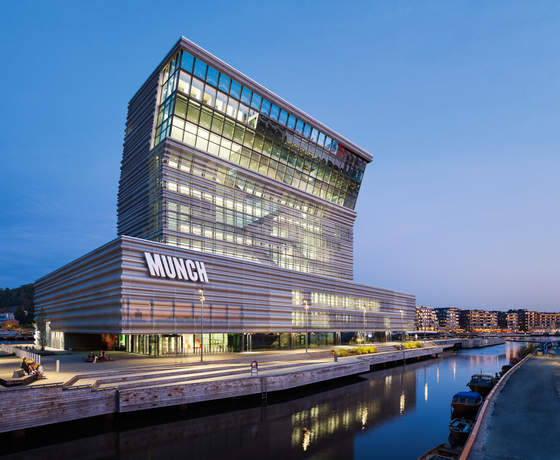 What was the idea behind the tower design?
The museum is 13 floors high, and that gives a possibility [for the visitors] to go see one or two exhibitions, go to the restaurants or cafes [in the museum] to have a bite or drink, while taking in the view. To have this vertical possibility at the shore, you can see the whole town from a new angle. It is a beautiful town, in the middle of natural resort, hilly surroundings […] the fjord […] so this museum also gives you the possibility of having a more fulfilled experience, not only through exhibitions but also talks, concerts, spending time with friends, being here doing some work, sitting somewhere and looking at the wonderful view. The museum is also the tallest building in the [area], it was practical for many other reasons that we are standing up like a lighthouse in the environment [that] is bustling with life.

Selfie with the first lady