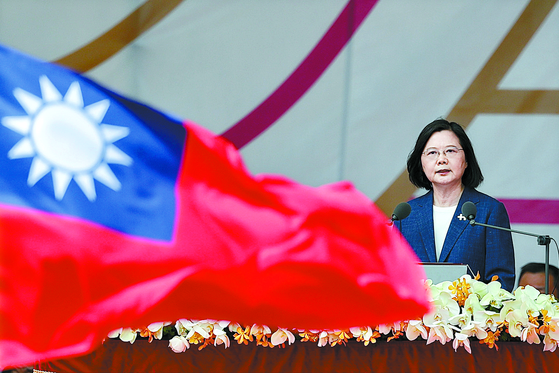 YOU SANG-CHUL
The author is the head of the China Instituteof the JoongAng Ilbo.


The Taiwanese Strait is heating up. Russian and American leaders, as well as Chinese and Taiwanese leaders, are mentioning the Taiwan issue. That means the situation is quite serious.

On Oct. 9 at the 110th anniversary ceremony of the Xinhai Revolution, Chinese President Xi Jinping said he will accomplish the unification of the homeland. The next day, Taiwanese President Tsai Ing-wen responded that Taiwan and China should not be subordinate to each other. Three days later, Russian President Vladimir Putin said China did not need to use force. There were various interpretations, as Putin may be supporting China or wary of China’s ambition.

On Oct. 22, U.S. President Joe Biden was asked whether the U.S. would defend Taiwan if China attacked. He said yes. It surprised the world as there was room for interpretation that Biden abandoned the “One China” principle. On Oct. 7, after Tsai said she believed in Biden’s words, controversy grew. But in the U.S., the dominant understanding is that Biden’s remark was a “simple mistake.” But did Biden really make a mistake? Is Biden’s mind blurred as he is turning 79 on Nov. 20? Probably not. It was likely an “intended mistake.” It helps America confuse China with “strategic ambiguity.”

Taiwan’s biggest concern is whether Xi will use force or not. What will happen if a war breaks out? Taiwan’s first female Vice President Lu Hsiu-lien wrote in “Why Taiwan Confronts China” that China is dominant in power. Taiwanese security expert Xu Chi said that China can dominate Taiwan in one day as it “can end the war as soon as it begins.”

If an inter-straits war breaks out, will the U.S. help Taiwan? As former U.S. President Donald Trump compared Taiwan to the tip of a Sharpie marker and China to the Resolute desk, security analysts say America is likely to give up small Taiwan.

Then China can attack Taiwan without caring about the U.S. How should the U.S. prevent this? Ret. Adm. Dennis Blair, the former commander-in-chief of the U.S. Pacific Command, gave a hint in February at a public hearing hosted by the U.S. Congress. He said America needs to make it hard for China to predict what it would do, and make China worry about how big an impact it will have on China and whether China can handle it. He argued that the U.S. should encourage China to suspect that if it strikes Taiwan, the U.S. will take action.

This seems to be the background of Biden’s “defending Taiwan” comment that was packaged as a “mistake.” The greater suspicions grow, the more reserved Xi will be.