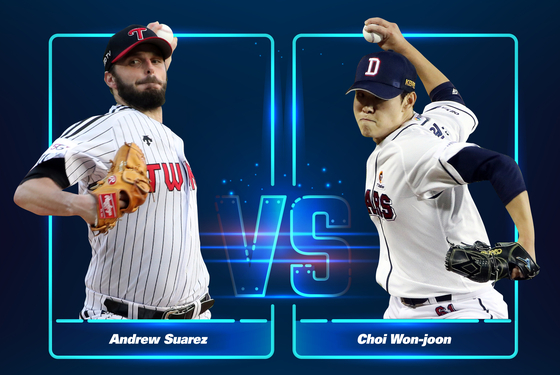 One of the KBO's biggest rivalries will play out on one of its biggest stages on Thursday, as the Doosan Bears take on the LG Twins at Jamsil Baseball Stadium in southern Seoul in the first game of the first round of the 2021 KBO postseason.


The LG Twins earned their ticket to the first round after finishing the regular season in third place with 72 wins, 58 losses and 14 ties, narrowly missing out on the top spot by just 1.5 games.

The Bears arrived at the first round in far more dramatic style.

As the fourth-place regular season finisher, Doosan had to play through the Wildcard Series in order to advance to the playoffs proper. As the higher-ranked team in that series, the Bears started with a one-game advantage over the fifth-place Kiwoom Heroes, meaning they only needed to tie the first game to advance.

But the Heroes held their own in the first game on Monday, scoring three runs at the top of the ninth to take a late 7-4 lead and force the series to a second game. That win leveled the playing field, meaning whoever won on Tuesday advanced to the playoffs.

Despite that early wobble, Doosan rallied on Tuesday to take an emphatic 16-8 win over the Heroes, stringing together an impressive 20 hits for the win.

The Bears took an early lead in the second game, scoring two runs in both the first and second innings to pull ahead 4-0.

Kiwoom got on the board with a single run at top of the fourth, but the Bears added five more at the bottom of the inning to jump ahead 9-1.

The Heroes responded immediately, scoring three at the top of the fifth to narrow the gap to 9-4, only for the Bears to score a huge six runs in the sixth to jump up 15-4.

The Bears added one more in the seventh and Kiwoom added three more in the eighth, taking the score to 16-7 going into the last two innings.

Kiwoom were able to get one more at the top of the ninth but could do little to chip away at the huge deficit.

The Bears also did it without hitting a single home run, with every single member of the starting lineup crossing the plate at least once.

The loss sent the Heroes home empty-handed for the second year in a row — last year the west Seoul club lost the Wildcard Series to the LG Twins. Despite the obvious disappointment for the Heroes, the loss wasn't unexpected — no fifth-place team has ever won the Wildcard.

Doosan's advancement sets up an intriguing playoff clash, and likely one that the Twins would have rather avoided.

Although LG finished four points above Doosan in the regular season standing, they only actually won one more game than their Jamsil rivals. Additionally, for the sixth consecutive season, the Bears have the advantage when it comes to head-to-head record.

The last time the Twins came out ahead of Doosan on head-to-head record for the season was in 2014, by one game.

LG and Doosan also have some recent history in the playoffs. Last year the two teams faced each other in the first round of the playoffs, with Doosan winning both games — 4-0, 9-7 — to advance to the second round. Doosan went on to reach the Korean Series, where they lost to the NC Dinos.

But despite history on the side of the Bears, things could be different this year. Last year Doosan were the well-rested third-place team coming off the back of a late season surge that had carried them up to third place on the final day of regular play. This year, LG have had plenty of time to rest while Doosan get just one day after playing through a grueling Wildcard Series with an especially long second game.

That rest could be what makes the difference. LG looked likely to reach the playoffs weeks ago, while Doosan had to hustle through the last few weeks of the season to lock in a spot.

That late autumn baseball streak is something the Bears have become famous for, but this year they did it on the back of the arm of starter Ariel Miranda, who broke the KBO's all-time single-season strikeout record this year. Miranda is currently out resting that arm, leaving Doosan without one of the most important weapons in their arsenal.