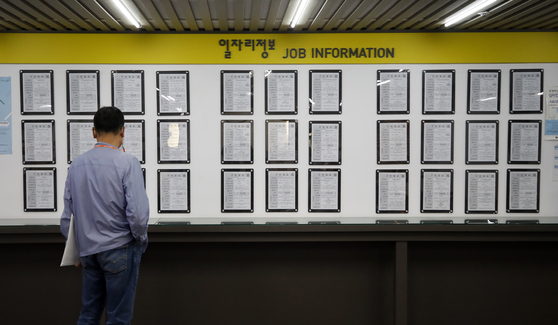 A person looks at a job bulletin board at an employment welfare center in Mapo District, western Seoul. [NEWS1]


The number of jobs has risen despite the pandemic, but the increase is in part-time positions.

According to Statistics Korea data relayed by the office of Rep. Yoo Gyeong-joon of the People Power Party on Thursday, there were 21 million people with paying jobs in Korea in August, up 2.1 percent or 433,490 from August 2019, or before the pandemic. This includes all people getting paid by someone else, excluding the self-employed.

Among the 433,490, 37.6 percent were people with jobs for less than 17 hours a week. These jobs are part-time jobs, temporary jobs on contracts or subcontracted workers.

Employees who work more than 36 hours a week, or more than seven hours a day, only accounted for 17.5 percent.

On Oct. 13, Finance Minister Hong Nam-ki wrote on Facebook that the employment rate is “continuing to show strong signs of recovery.”

However, the rise is not driven by the young.

Positions for young job seekers rapidly shrunk during the pandemic. Some companies that did hire preferred experienced workers, not people fresh out of college.

Rep. Yoo said the number of young full-time workers is on the decline, and the drop is worrying.

“The employment crisis for young job seekers is becoming more serious because the current administration is focused too much on impractical goals to cut public sector contract jobs to zero and has been neglecting improving the wage system or reforming the labor market," said Yoo. "They are making up for the falling employment rate by increasing jobs for the elderly."