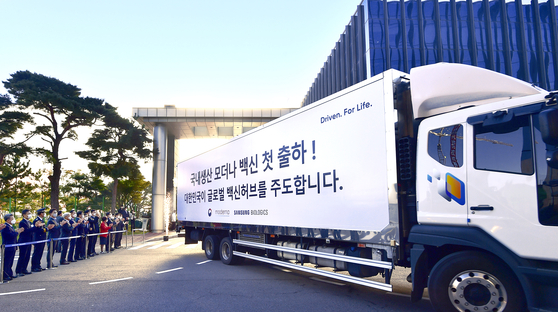 A truck carrying 2.4 million doses of Moderna vaccines bottled and packaged by Samsung Biologics leaves the Korean company’s plant in Songdo, Incheon, for domestic use on Oct. 28. [NEWS1]


Korean biopharmaceutical companies are enjoying a strong third quarter on the lingering Covid-19 pandemic and sales of vaccines they produce under contract manufacturing organization (CMO) deals.

“Performances improved on strong global sales of the AstraZeneca and Novavax vaccines that were produced by SK Bioscience,” the company said in a regulatory filing.

The company is likely to stay in the black in the fourth quarter as well as the Novavax vaccine won an emergency use approval from Indonesian health authorities on Nov. 2. Novavax plans to lodge applications with the European Union and Canada soon.

“SK Bioscience is expected to achieve an even larger profit jump in the fourth quarter,” said Lee Dong-gun, a senior researcher at Shinhan Investment. “The company is likely to reveal the results of its Phase 2 clinical trials of the GBP510 Covid-19 vaccine, and if the results are good, many countries will contact the company to make orders.”

GBP510 is the first domestic Covid-19 vaccine candidate to get the nod to start Phase 3 clinical trials — the last round required for a vaccine. The Phase 3 trials take place in multiple countries including Korea and Southeast Asian and European countries. The company aims to release the interim results of the Phase 3 clinical trials by the first quarter of 2022 and, if the results are good, market the vaccine in the first half.

Samsung Biologics said the “increase in the number of orders and the high operation rate of our third plant in Incheon were the largest contributors.” Last week, the company started distributing Moderna vaccines bottled and packaged by Samsung Biologics. The two companies signed the fill-and-finish deal in May.

“Demand for SD Biosensor’s Standard Q test kit, which is currently high in Asian countries, is likely to expand to African countries, where vaccination rates remain low,” Lee said. “If Covid-19 oral treatments release in the market in the future, test kits will receive global attention once again."

According to Lee, SD Biosensor’s third quarter revenue is expected to increase 13 percent to 616.3 billion won and operating profit up 39 percent to 282 billion won.