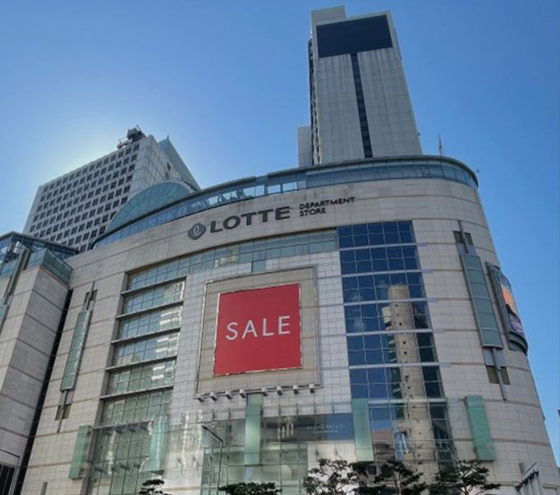 
Lotte Shopping reported 305.77 billion won ($260 million) in net profit in the third quarter, up more than 10,000 percent on year, according to a preliminary report released Thursday.

Lotte Shopping said the spike in net was a result of saving corporate tax from liquidating Lotte Shopping Holdings (Hong Kong), a retail holding company of Lotte business in China.

The company reported 4 trillion won in sales in the July-September period, down 2.4 percent on year, underperforming a market consensus of 4.06 trillion won.

It blamed the dip in sales on people not being allowed to use government relief checks at its stores.

The operating loss from the e-commerce business expanded more than 60 percent on year to 46 billion won. Sales were down 14 percent during the same period to 24 billion won. Lotte Shopping said internal changes made to boost synergy effects of its online business increased its general and administrative expenses.

The operating loss at Lotte Cultureworks, which runs Lotte Cinema, shrunk almost 30 percent to 32 billion won on sales that rose 20 percent to 79 billion won. Sales were improved thanks to the gradual recovery from the Covid-19.

Lotte Shopping is “building a foundation to help [our] online business leap by the restructuring of the offline [business] from 2020 through 2021,” said a spokesperson for Lotte Shopping in a statement.

“Having lots of [offline] channels was seen as a plus [for Lotte Shopping] in the past, when the retail industry grew rapidly,” said Cho Sang-hoon, chief researcher at Shinhan Investment, in a report released last month. But its “market share in all channels shrunk as it failed to properly respond to the period when consumption patterns shifted from offline to online.”

Lotte On was launched last April.

The number of its monthly active users was 1.7 million as of August, up 21 percent compared to early this year.

Cho added Lotte Shopping is projected to report 610.8 billion won in operating profit next year, up 82.4 percent on year, followed by the government’s “With Corona” set of policies to revive the economy, and the impact of its restructuring over the past four years.