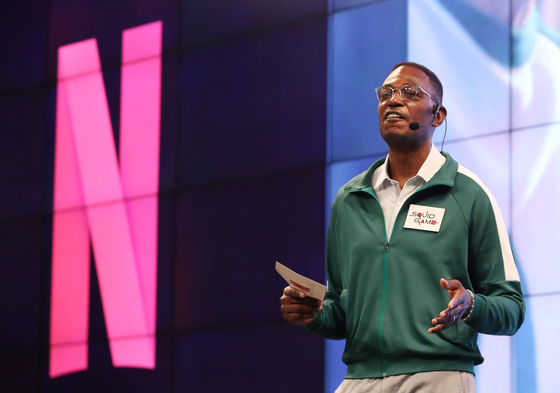 
Netflix stuck to the script Thursday and continued to wheel out vague suggestions about partnerships, avoiding the main issue of whether it should be paying more for bandwidth consumed by its runaway hits.

"We very much want to partner with the internet service providers [ISP] here in Korea," said Dean Garfield, Netflix vice president of public policy, as he fielded 17 questions from an increasingly frustrated press for an hour and 10 minutes.

When asked whether Netflix is willing to pay for network usage, he only said that the company wants to "figure out a way of working together that is beneficial to them and that makes sense for us as well as Korean consumers."

He did not say what the partnerships would be exactly, or whether Netflix will pay a network usage fee to SK Broadband, a fee that the company said it has never paid anywhere despite its service being available in 190 countries.

The recalcitrance on the part of the world's largest streaming provider comes just as Google is backing down and allowing app developers in Korea to use third-party payment systems. It too had resisted demands from regulators only to finally give in and accept the terms and conditions set out for operating within the country.

In April 2020, Los Gatos, California's Netflix filed suit to block the demand for the payments from SK Broadband and lost, but appealed immediately. The Korean ISP countersued on Sept. 30.

SK Broadband said in a statement on Thursday that Netflix has not requested a meeting since Garfield arrived in Korea, nor has it detailed the partnerships it plans to build.

"We welcome that Netflix has declared its will to negotiate, and SK Broadband will gladly sit at a negotiating table when Netflix asks," the company said in a statement following Netflix's press conference.

"But since Garfield has arrived, he has only been arguing why it is right for Netflix to free-ride on our network. And for this reason, we are doubtful as to whether Netflix truly has the will to resolve the problem through negotiation."

Garfield, an Amsterdam-based, American attorney with deep tech experience, has been meeting this week with regulators and legislators, talking up the notion of partnerships and arguing against legislation that would require the company to pay the fees being requested by SK Broadband. 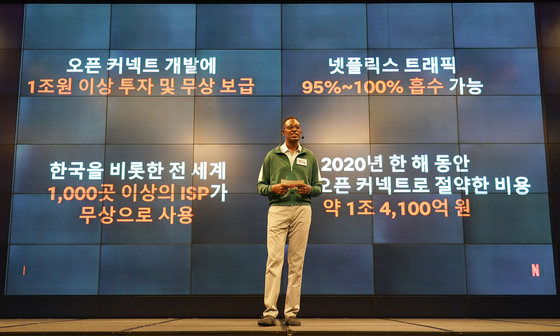 
During the press conference and during the meetings, Garfield stressed the pros of its Open Connect Appliances (OCA).

OCA, according to Garfield, is Netflix's solution for clearing online network congestion created by the increasing number of Netflix users globally.

It is a type of content delivery network (CDN) technology that Netflix has developed to lessen the data traffic for local ISPs. Simply put, ISPs build the network highway and Netflix sets up storage houses for data near users.

"We fully embrace the notion that the internet ecosystem, and the networks that are a part of it, share responsibilities," Garfield said.

"We fully embrace the notion that we have a responsibility to help advance and ensure the sustainability of that ecosystem. That's why we innovated Open Connect."

A CDN saves data at nodes that are distributed around the network, rather than sourcing all the information from a single centralized network. This piggybacking allows for frequently used data to be made available easier and faster, while reducing traffic load at the ISP's end.

"We want to support and work with internet service providers to make sure that streaming is easy and efficient. That is why we've invested over a trillion won [$847 million] to build and provide a content delivery network that we call Open Connect," Garfield said.

OCAs have been deployed by a thousand ISPs around the world and saved them more than $1.2 billion of network maintenance costs in 2020 alone, Netflix said.

Every ISP has the choice of whether to use Open Connect, but Netflix is not paying any ISP anywhere in the world network usage fees, according to Garfield.

When asked what the options are for ISPs that do not adopt OCA, namely SK Broadband, Garfield again answered that the company wants to "build a partnership with SK Broadband" that's in both companies' interests.

"We have over a thousand ISP partners around the world, and with those ISP partners, we have commercial relationships that involve financial transactions whether that's on marketing or around set-top box set-ups, or around other business arrangements," he said.

"It is only a natural business relationship that's negotiated between the partners. That's something we aspire to do in Korea as well and are working hard to be able to accomplish." 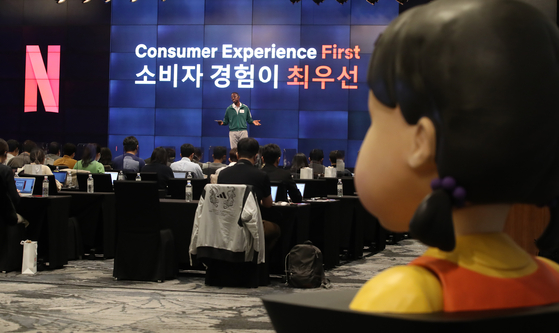 A doll from the popular Netflix original series ″Squid Game″ is set up at the back of the hall during the press conference held on Thursday at central Seoul. [YONHAP]


Netflix could be ordered to pay up if the law changes. In July, Rep. Kim Yeung-shik of the ruling Democratic Party put forward a bill that would mandate operators to pay network usage fees to ISPs.

The vice president emphasized that Netflix wishes to build a relationship of trust with Korea, which he sees as "the center of the cultural revolution taking place around the world."