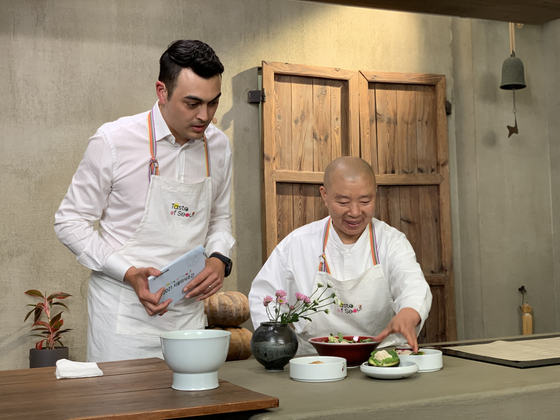 Buddhist Nun Jeong Kwan, right, master of the Cheonjinam Hermitage at the Baekyang Temple, speaks during a temple food cooking class on Wednesday, which was held as part of the "2021 Taste of Seoul Week." [SEO JI-EUN]


Veganism is a hot topic these days, be it for its health or environmental benefits, and Buddhist nun Jeong Kwan, a master in Korean temple cuisine from Baekyang temple, knows it well as she introduced her personal cooking style and food philosophy at a gourmet cooking course, finishing off the “2021 Taste of Seoul Week.”

Under the theme “Six-day trip of World’s Delicacies in Seoul,” the Seoul Tourism Organization hosted a festival from last Friday until Wednesday, introducing the capital city’s gourmet culture. It included a series of programs, from screenings of movies about food, Seoul city bus tours going to popular foodie destinations, and a temple food cooking class with nun Jeong Kwan, who rose in popularity after appearing on the Netflix show "Chef’s Table" in 2017.

“Because of the pandemic, there was a growing interest in healthy food, well-being and vegetarianism here and abroad,” said Beom Mi-sun, manager of the tourism industry division at Seoul City Hall. “And recognizing these needs and the popularity of [Jeong Kwan] from the Netflix show, we decided to do a program together.” 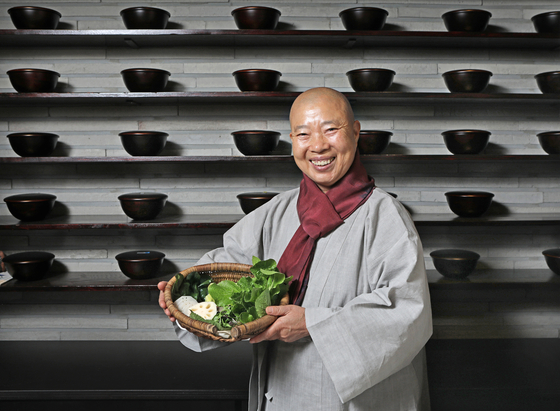 Jeong Kwan poses for a photo during an interview with the Korea JoongAng Daily at her restaurant Doosoogobang in Suwon, Gyeonggi, on Wednesday. Behind her are shelves with baru, or bowls used by Buddhist monks. [PARK SANG-MOON]


On a crisp autumn night on Wednesday, Jeong Kwan virtually welcomed “food influencers” of London's Korean Cultural Centre UK from the cozy, traditional kitchen at her Buddhist restaurant Doosoogobang in Suwon, Gyeonggi. The class was also broadcasted live on YouTube for foodies all over the world to watch.

Originating in Korea's Buddhist temples, temple cuisine is much more than just vegetarian food eaten by monks and nuns at temples — it is a way to practice Buddhist teachings, from growing the ingredients to preparing and eating the food.

“Temple food is based on vegetarianism, but it also carries the respect for life,” Jeong Kwan said in an interview with the Korea JoongAng Daily.

“We think and study the origins of the ingredients and of our heart — where we were born, where we came from, and what we’re practicing,” she said. “In that way, we refer to [temple food] as a food of practice, and eventually a food of enlightenment.”

As part of the Seoul Gourmet Week, Jeong Kwan said she chose tofu as the main ingredient, as it represents the country's capital city.

“Seoul has 1,700 years of history, […] and whenever there was a big event or festivity, tofu was always served to the king and upper class; it was also shared with commoners outside the four gates of Seoul,” she explained.

“Traditionally, Koreans have been called the 'white-clad race,'” she added. “The whiteness of food like that of tofu purifies and clears our mind, and that is why I chose tofu.”

During the class, the Buddhist nun presented recipes that can be made with tofu — dubujang (fermented tofu), dubujorim (tofu boiled down in perilla oil and soy sauce) and a salad-type dish using both the dubujang and the dubujorim. Jeong Kwan also introduced a more Westernized recipe for a baguette sandwich with tofu. 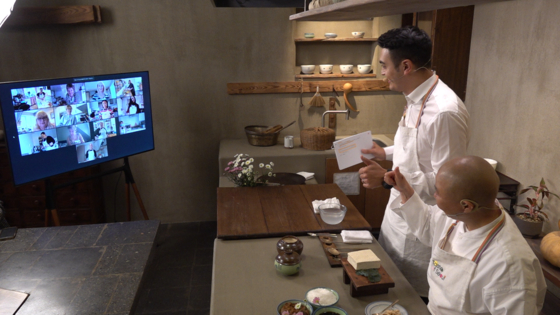 Jeong Kwan, right, interacts with participants from the Korea Culture Centre UK joining via Zoom during a temple food cooking class on Wednesday, which was held as part of the "2021 Taste of Seoul Week." [SEOUL TOURISM ORGANIZATION]


Thirteen British food enthusiasts of different ages and genders followed the nun’s recipes through their screens.

One participant cooked in her kitchen with her child while wearing a “Taste of Seoul” apron, while another listener chose to take notes instead of cooking along.

When Jeong Kwan asked in Korean if everyone was following along well, the participants nodded or gave a thumbs-up.

Even if it's just mashing a block of tofu, having the proper mindset and attitude is important in temple cuisine, Jeong Kwan said.

Mashing the tofu with your own hands, without using any tools, will bring it back to its original state before it became a solid block. While doing this, you think back to where you came from and who you are, and become one with the ingredients, she explained.

From time to time, students raised their hands and asked questions, mostly about ingredients they couldn’t find at their local supermarkets, like firm tofu or chocheong, a Korean rice syrup.

After picking up a head of cabbage from her own field, Jeong Kwan emphasized her food philosophy of actually, physically touching the food — feeling its energy by cutting the stems and the roots off with one’s own hands, without using any instruments.

“Even the roots as well, they’ve got their own energy of life,” she said. “Eating them is a no-brainer in Korea, and we eat them all.”

She continued, “The way to cook is to think about where and how today’s ingredients came into our hands, through feeling the food and its energy. It’s not hard labor: It’s fun, enjoyment — like life.”

Chopping the vegetables and placing them into the bowl, Jeong Kwan said, “People who cook should have their ears, heart, everything open, and hear and feel the rhythm of the ingredients [when tearing and chopping them,] like music.” 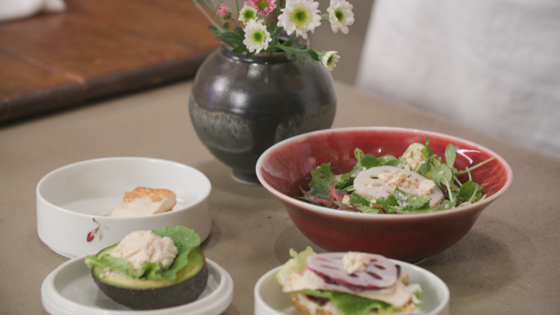 
Eating really is more than the food itself, Jeong Kwan said.

“Eating is all about connecting your mental and physical energy as one,” she said. “We eat food with our heart, and we share the feelings with another person — commenting on how delicious it is and sharing the joy.”

Although it was a late night in Seoul, with the class finishing at around 9:30 p.m., the Buddhist nun kept a cheerful smile on throughout the whole session.

“Don’t forget to practice what you’ve learned today,” said Jeong Kwan. “Keep the healthy thoughts, and I’m sure there will be a connection made between us through this Seoul Gourmet Week.”

“By showing that Seoul not only has Korean cuisine but also Western, Asian, grilled gourmet and vegetarian dishes, we’d like to promote that there are no food restrictions when traveling here,” Beom said.

Gourmet in a box