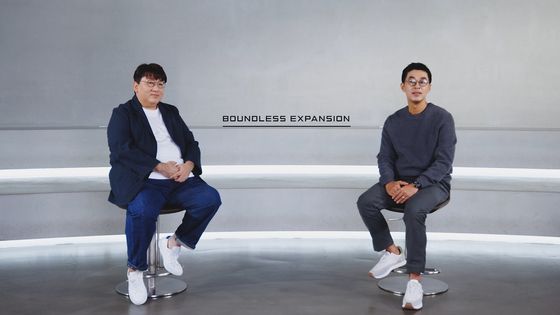 
HYBE, the entertainment powerhouse behind boy bands BTS and Tomorrow X Together, announced its upcoming plans during an online briefing Thursday.

Titled “2021 HYBE Briefing With The Community,” the session was held on YouTube under the theme “Boundless.” HYBE introduced new works in progress, including the launch of HYBE’s very own "original stories" — webtoons and web novels that star the boy bands of HYBE.

Bang Si-hyuk, chairman of HYBE, explained that the theme “Boundless” is the company's new business model, encompassing that in entertainment, “the boundaries among countries and cultures have disappeared” and “this represents how HYBE does business.”

HYBE disclosed that it aims to expand its IP, or intellectual property, with “original stories,” via Naver Webtoon. The stories will be adapted as webtoons and web novels and feature the artists as cast members.

HYBE also said that it will release a new BTS game and update its fan community platform Weverse early next year. The game will be about the seven members of BTS and their interactions with fans in a virtual world. Weverse will be merged with Naver’s fan community platform V-Live and include a new “live notification” feature that allows artists to host live chat sessions.

HYBE also partnered with Dunamu, a fintech company, to develop an NFTs (nonfungible token) business as part of a joint venture. Bang likened the NFTs to photo cards, which are made of paper and are limited in quantity. These photo cards will be made into digital assets that can be collected, exchanged and displayed in online fan communities such as Weverse.

Chairman Bang and CEO Park Ji-won stressed that in order to “create meaningful and valuable content and services [...] more collaboration and communication are necessary,” and that all the aforementioned new projects will be in full swing by early next year at the latest.