When the news broke that “Yumi’s Cells” was set to be adapted into a television series last year, fans of the mega-popular Naver Webtoon were not pleased.

The 512 episodes of the series, created by Lee Dong-geun, garnered some 3.2 billion views and 5 million comments during the course of its over five-year run.

"Yumi's Cells" centers around an average 30-something-year-old woman named Kim Yumi and some 200 different cells residing in her brain. Each of the cells has a different purpose, with some controlling her thoughts, some her emotions and others her behaviors.

One of the biggest concerns fans had was how would the cells, which they had grown to love, be portrayed. Concerns only grew when the production companies in charge of the adaptation — Studio Dragon, Marycow and Studio N — revealed last December that the series would be a combination of live-action and 3-D animated scenes, an unprecedented format in the local broadcasting industry. 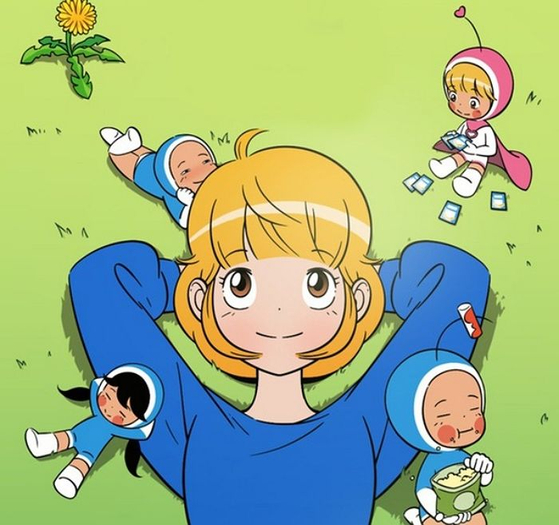 Tving series "Yumi's Cells" is adapted from the massively popular Naver webtoon with the same title which wrapped last year after a total of 512 episodes. [NAVER WEBTOON] 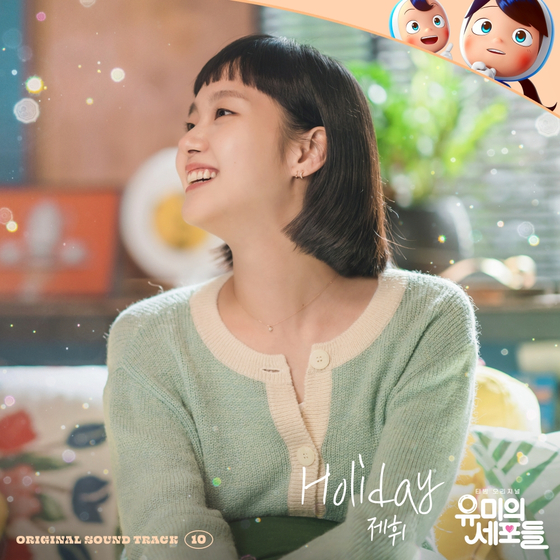 
However, when the series started airing through Tving in September, such concerns were almost instantly laid to rest.

The animated scenes and the cells were adorable and Yumi (played by actor Kim Go-eun) and the other characters had been perfectly transported from the webtoon to screen. The series wrapped its first season to applause last week, despite a sad ending, with the news that a second series was on the way next year.

In addition to the acting of the cast, the voice actors that portrayed the cells were lauded for their performances. On the forefront of Yumi's brain are the Rational Cell and the Emotional Cell. Despite being polar opposites, the two cells are best friends, and work in tandem to control Yumi’s reactions.

This chemistry between the cells comes as no surprise considering the two voice actors that play the pair are actually close friends in real life.

Park Ji-yoon, who plays the Emotional Cell, has been working as a voice actor since 2005 and is known for her portrayals of Anna in the Korean-dubbed version of Disney’s “Frozen” series (2014, 2019) and Rapunzel in Disney’s “Tangled” (2011).

Shim Kyu-hyuck. who took on the role of the Rational cell, has been active as a voice actor since 2007 and has dubbed the roles of Aladdin in Disney’s live-action film “Aladdin” (2019), Tom Holland in the Marvel Cinematic Universe, and Timothée Chalamet in romantic drama film “Call Me By Your Name” (2017).

In an exclusive interview with the Korea JoongAng Daily at its offices in Sangam-dong in western Seoul on Tuesday, both actors confided that while they were initially just as worried as the fans, they were also excited to take on the challenge. The following are edited excerpts. 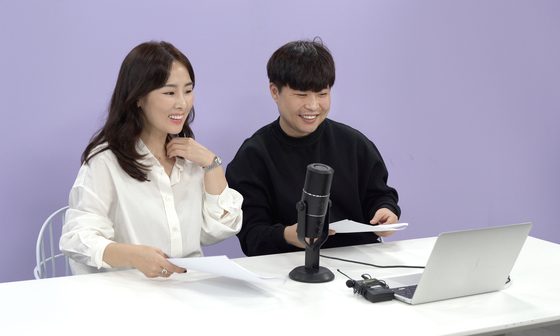 Voice actors Park Ji-yoon, left, and Shim Kyu-hyuck who portrayed the Emotional Cell and the Rational Cell in Tving original series ″Yumi's Cells,″ speak during an interview with the Korea JoongAng Daily at its offices on Tuesday. [JEON TAE-GYU]

Q. Can you tell us about the casting process? How did you feel when you found out that you would be portraying the cells in “Yumi’s Cells”?

A. Park: At first, the producer [Lee Sang-yeop] couldn’t exactly tell us what the project was about, and I was stumped because normally you don’t really have to be that secretive when it’s an animated project. [The casting team] usually asks me to give a sample of my work or asks me to come in for an audition, but we just talked over the phone a lot and the producer said that I should come in but not tell anyone — even though I didn’t know anything! (laughs). When I went to the audition, that’s when I found out that they were making a television series on the famous “Yumi’s Cells,” and that voice actors would be featuring as the cells. I wanted in.

Shim: I auditioned for the role of the Rational Cell, but it was a unique role because not only was I playing the cell, I was also acting as a narrator. And of course, there had never been a format in Korea which switched between live-action and animation, I had only seen that in Hollywood films for children. But this series was not for children, it’s for adults.

Because the series was so popular and was being adapted in a never-before-seen format in Korea, did you feel under pressure? What were you most worried about?

Shim: The thing I was most worried about was how the live-action and animated scenes would connect. I just tried to focus on the scenes themselves and I used the original webtoon to reference how the cells looked, because when we started recording, we only had a few sketches that showed how the cells would look. I think the animation team designed how the cells would move and speak based on our acting.

When I finally saw the series, to my relief, everything looked natural. Another worry I had was since we were recording during the Covid-19 pandemic, we had to do all the scenes separately. Usually when we’re doing an original animation, we’d gather around and record them together, and see how others would react, and its basically a more fun, creative building process. But for this project, the crew stayed outside while only one voice actor worked in the recording booth.

Park: I was actually relieved when I found out I was doing it with Shim. We are close, but I also knew how he would have read his lines even though he wasn't right next to me. So I reacted and acted to how I imagined he had performed.

Our homework was to dissolve the distance that people feel when it comes to a animated work. I know that some people dislike the fact that the content has been dubbed. Since this is for adults, I didn’t want them to say, “this is why I don’t like dubbed content. It’s so childish.” I didn’t want our performance to hinder their immersion into the story. So I tried to not to sound too childish when I acted. 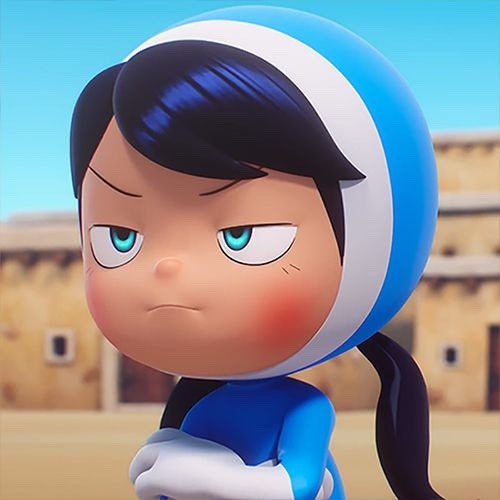 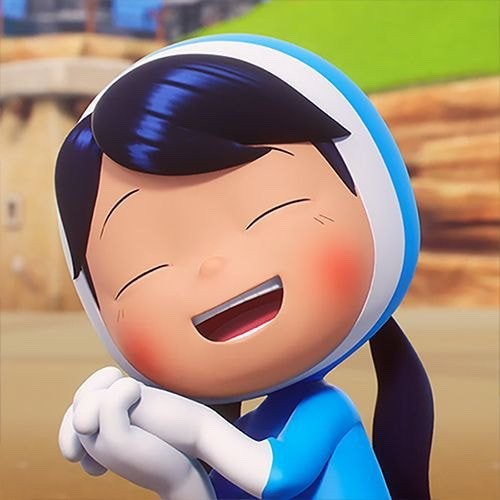 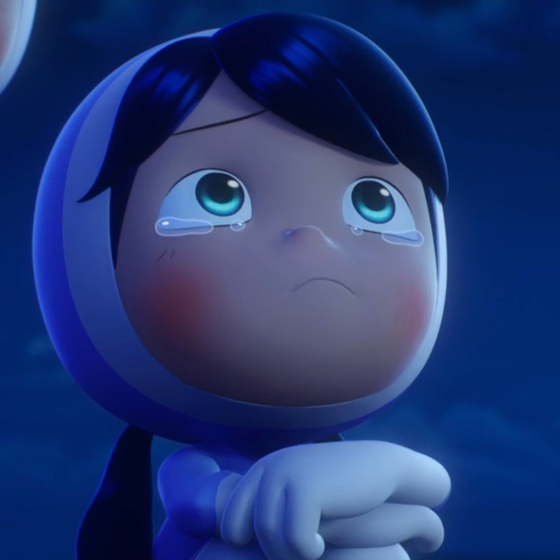 Yumi's Emotional Cell who controls her mood swings and emotions[TVING]

Park: I’m very emotional, but I don’t think my Rational Cell lets my Emotional Cell take control for too long. I think the former sort of hold the reins. I thought I was an emotional person, but as I got older and got married, I think I became more practical, and stronger too.

Shim: It’s the opposite for me. For a long time I thought I was a rational person, and I wanted to be that way. Now, I think the Rational Cell in my head is only a figurehead. The real power comes from the Emotional Cell. 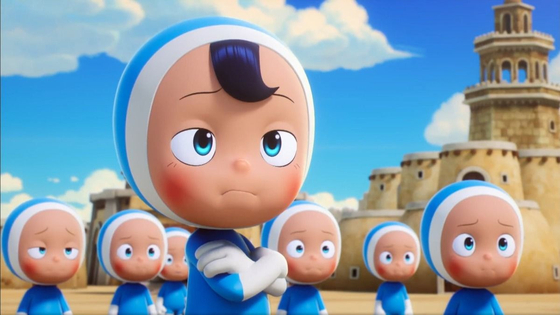 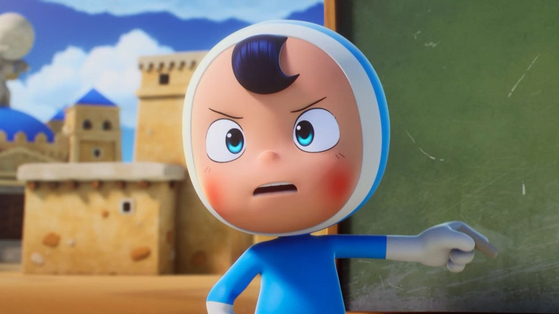 
How is voice acting different from the acting we see on screen?


Park: Personally, I thought voice acting would be easier than acting on screen, since my face doesn’t show. But I quickly realized that was a mistake. It was difficult to make the listeners feel that I’m crying or that I’m sad with only my voice. So I started to observe my surroundings and my own experiences, other people’s tones, or their manner of speech and how it changes with their facial expression, and I would mimic them.

Shim: The initial shock that I felt when I started out as a voice actor was that some emotions would not be properly conveyed through my voice. For instance, if I were to act out the emotion of feeling pleased, my face looked that way but my voice couldn't represent that. So I worked super hard on matching my facial expressions with my voice, to synchronize them. Once I figured that out, acting got easier.

For the rest, it all depends on the character, and the pictures we’re given to work with. I mean, it would be awkward to give detailed acting when it’s a simple 2-D animation. Or when we’re dubbing for Hollywood films, actors such as Tom Holland and Timothée Chalamet are extremely detailed when it comes to their acting, and it would be again, weird, if I acted the same way as how I act for animated projects. So we’ve become used to making adjustments and balancing how far we go based on the projects. I’ve seen actors who just shine on stages or in front of cameras, but who struggle when it comes to dubbing.


What has been the proudest moment of your careers?

Park: We’re actually half joking, half serious. Since voice acting takes place mostly behind the screen, it’s difficult to see people’s responses. All of our friends and acquaintances only tell us good things, no one wants to criticize us. But for well-known or popular projects, a lot of people want to talk to us about them and we can see how much they really loved it. It would be a lie to say that we don't get attached.

Shim: I don’t think it can be helped. When we go into the recording booth, it can get a bit lonely, because it’s dead-quiet in the room as all of the walls are soundproof — it feels like we’re out in space from “Gravity” [2013]. Before Covid-19, at least we could go in the room together for some scenes, react, and laugh together during the funny scenes. So the projects that people actively respond to have become more precious to us. We’re always craving reactions. I mean, I’ve also received lots of love for portraying “Aladdin” [which sold over 10 million tickets]. We don’t focus on the success too much, it just makes us feel good.