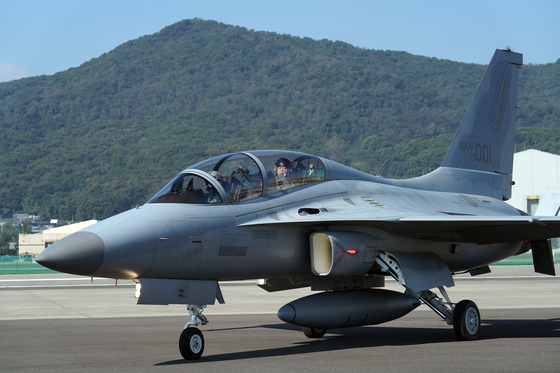 President Moon Jae-in arrives in an FA-50 light fighter jet at the Seoul Aerospace and Defense Exhibition in Seongnam, Gyeonggi, on Oct. 20. [NEWS1]


Korea Aerospace Industries (KAI) is aiming to supply Slovakia with 10 domestically developed FA-50 light fighter aircraft as part of the central European country's push to replace its ageing fleet of trainer jets, according to the state arms procurement agency on Thursday.

Slovakia plans to replace its ageing fleet of L-39 trainer aircraft and is expected to issue a call for proposals from aircraft manufacturers in the first half of next year, a DAPA official said. The project is expected to be worth $500 million.

The FA-50, developed jointly by KAI and U.S. defense manufacturer Lockheed Martin, is a combat variant of the T-50 supersonic trainer jet. The FA-50 can be used for both training and operational purposes.

The FA-50 gained media attention last month after Moon rode one to make his entrance at the Seoul Aerospace and Defense Exhibition (ADEX) — the first time for a Korean president to fly over domestic territory in a fighter jet — in a symbolic move to highlight his confidence in the fighter jet.

As part of a wider export push earlier on Wednesday, President Moon Jae-in held a summit with Hungarian President Janos Ader and agreed to a strategic partnership with the country.

"Despite the Covid-19 pandemic, bilateral trade reached a new high last year," Moon said during a joint press briefing after the summit, adding that he hopes Korea and Hungary will step up their cooperation in electric vehicles and batteries and cleaner energy development.

Moon's state visit to Budapest marks the first to the country by a South Korean president in 20 years.

According to Korean government data, bilateral trade between South Korea and Hungary stood at $3.6 billion in 2020, compared with $2.97 billion in 2019.