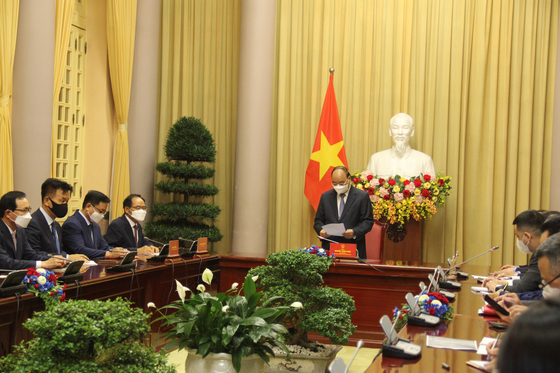 
Korea donated another 290,000 doses of the AstraZeneca vaccine to Vietnam, the Foreign Ministry announced Thursday.

“Korea decided to assist Vietnam’s efforts to fight the pandemic by sending around 290,000 doses of the AstraZeneca vaccine,” the ministry said in its statement. “We hope that this vaccine assistance helps in the worldwide effort to fight the pandemic and also contributes to Korea-Vietnam ties.”

The vaccines sent to Vietnam Wednesday, which arrived Thursday, were donations, with no string attached. The Korean government has swapped vaccines with Britain, Israel and Romania, meaning that the vaccines were sent by one country and will later be reciprocated by the receiving country.

“Korea will continue to contribute toward solving the vaccine shortages around the world, in both bilateral or multilateral formats,” a Foreign Ministry official told the Korea JoongAng Daily on Thursday.

This was not the first time for Korea to donate vaccines, be it to Vietnam or other countries.

Korea sent 1.1 million doses to Vietnam and 470,000 doses to Thailand on Oct. 12, the first time that Korea donated vaccines abroad, and then sent 1 million doses to Iran on Oct. 25. All donations were AstraZeneca vaccines.

“There are currently no government vaccination programs that focus particularly on AstraZeneca vaccines, so we took that into consideration when deciding which vaccines to donate,” said another Foreign Ministry official. “We also took into consideration the expiration dates of the vaccines at hand.”

The AstraZeneca vaccines were the first to arrive in Korea when the country began vaccinating its population in February, the first recipients being patients and medical staff at long-term convalescent hospitals and nursing homes for the elderly.

As of Thursday, around a quarter of Vietnam’s population has been completely vaccinated and nearly 60 percent has been given at least one shot.

In Korea, around three quarters of the population have been completely vaccinated, and nearly 80 percent have been given at least one shot as of Thursday. The country is currently vaccinating its youth aged 12 to 17, all with Pfizer vaccines.

Korean companies have also donated to Vietnamese government funds created to help the country buy vaccines. Korea’s Samsung Electronics, one of the largest international investors in Vietnam, employs around 110,000 people in the country. Samsung and SK Group are a few in a group of Korean companies that donated at least $3 million to Vietnam in June.