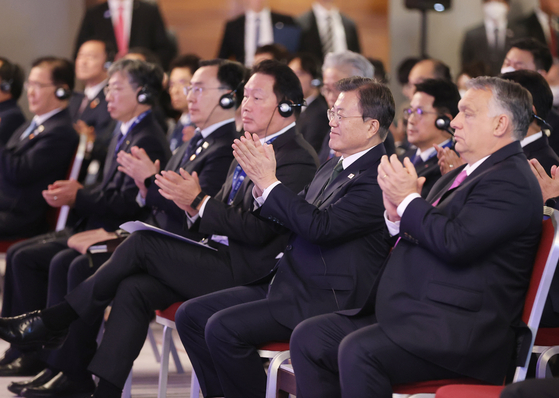 President Moon Jae-in agreed to help Hungary and Poland with nuclear power ambitions, despite his own phasing-out of nuclear power at home, through agreements signed on a visit to Hungary on Wednesday.

Moon attended a business forum in Budapest on Wednesday joined by representatives of the Visegrad Group (V4), and signed seven agreements on electric vehicles, batteries and renewables with Hungary, Poland, the Czech Republic and Slovakia. Moon's delegation included the minister of trade, industry and energy and representatives of the Korea Chamber of Commerce, Korea Trade-Investment Promotion Agency, LG Energy Solution, Kia and Posco.

Two of the agreements concern Korea’s assistance with building nuclear power plants in Hungary and Poland.

Moon did not comment on the nuclear partnership in an address at the forum, other than saying he looks forward to working with the V4 on hydrogen power and other renewable energy sources.

One of his aides traveling in the presidential delegation, when asked about the two nuclear energy agreements, said that despite the phase-out policy at home, “Korea will also be generating electricity from nuclear energy for a while,” adding that cooperation on nuclear plants abroad is a “win-win strategy” for Korea and its partners.

The partnership on nuclear energy was also discussed between Moon and Hungarian President Janos Ader during a summit meeting on Wednesday morning.

“The two countries agreed that carbon neutrality would not be possible without the use of nuclear energy,” Ader said during a joint press conference that followed the meeting.

Moon did not comment on the topic during his address to the press, other saying he looks forward to working with Hungary on “digital transformation and green transformation.”

At home, the Moon administration’s policy is to phase out nuclear power.

In 2017, Moon announced that the country would halt plans to build new nuclear plants and would not extend the lifespans of existing ones in a bid to phase out nuclear power. By 2079, the country will have no operating nuclear plant, the government has said.

Moon has been anti-nuclear energy since the accident in 2011 at the Fukushima Daiichi nuclear plant, which had a big environmental impact on Korean air and water. His first nuclear phase-out pledge was made in 2012 when he unsuccessfully ran for the presidency, and he renewed the pledge again in 2017.

The administration also intends to be carbon neutral by 2050 and reduce its carbon emissions by 40 percent compared to its 2018 level by 2030.

Moon’s spokesperson Park Kyumg-mee in a statement later on Wednesday said that Korea remains “committed to phasing out of nuclear power as planned.”

“Instead of building new nuclear power plants, Korea intends to invest in new renewable energy sources and hydrogen energy, and intends to reach carbon neutrality through increased reliance on these,” Park said.

In their meeting, Moon and Ader also agreed to elevate  bilateral ties to a strategic partnership. Hungary was the first country in the Eastern bloc to establish diplomatic ties with Korea in February 1989 during the Roh Tae-woo administration. Moon also met with Hungary's Prime Minister Viktor Orban later on Wednesday.

Moon is in Hungary through Friday for a three-day state visit, the first from a Korean leader in 20 years. He was scheduled to meet with heads of the V4 states, altogether in one meeting and separately after that with each head of state.

First Lady Kim Jung-sook, who accompanied Moon on his Europe tour starting with the G20 summit in Italy and COP26 in Scotland, visited the national archive of Hungary on Wednesday.

She was accompanied by members of the National Archives of Korea, who examined records and maps showcasing long-standing people-to-people ties between the two countries that date back to early 20th century, including a diary by Hungarian priest Vay Peter.

“Father Peter wrote, ‘I have always been certain that this people and country have a very important role to play in the future,’” she said. “He couldn’t have known then, but his writings read almost like a letter he had intended to be read out loud 100 years later to the peoples of both nation. […] I hope that our two nations’ exchanges today will also be remembered fondly by our next generations.”

korea and hungary to cooperate on nuclear energy v4