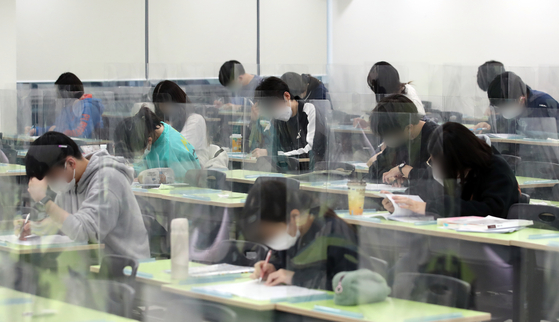 Two weeks before the College Scholastic Ability Test (CSAT), high school seniors study at a cram school in Seoul on Thursday. As daily cases surge, the Ministry of Education will be inspecting locations frequently visited by students such as cram schools for violations to the government's regulations on Covid-19. [NEWS1]


With new Covid-19 infections spiking in the mid-2,000s for two days in a row, the government is looking for more sick beds for patients in the greater Seoul area.

The Seoul city government on Tuesday held a meeting with 22 hospital directors and infectious diseases department heads to discuss a potential administrative order that would require large private hospitals to raise the number of available beds for Covid-19 patients.

According to sources who were in the meeting, the city officials consulted with medical experts on whether to require private hospitals to make up to 3 percent of their sick beds available for Covid-19 patients.

Last December, the government placed its first administrative order on private hospitals that have over 700 beds, to reserve 1 percent of its beds for Covid-19 patients. It placed a second order in August -- amid the fourth wave of the pandemic -- to expand that number to 1.5 percent.

According to the Central Disease Management Headquarters, 584 or 52.6 percent of beds designated for Covid-19 patients nationwide were vacant, as of Thursday morning.

But zooming in on Seoul, Gyeonggi and Incheon, the rate drops to 39 percent or 269 available beds.

This is because around 80 percent of the newly infected cases reported during the spike on Wednesday and Thursday were concentrated in the greater Seoul area.

Medical workers say they are in a calm before the storm, awaiting a wave of critical cases they expect to hit in a few weeks’ time.

“With more Covid-19 patients admitted to our ICUs in the last two days, we are already short of ECMO [extracorporeal membrane oxygenation] machines,” said a staffer at a hospital in Gyeonggi.

ECMO is a life support machine that is used during the final stages for the sickest patients.

“If ICU beds in the greater Seoul area fill up, the country may be forced into a circuit-breaker situation," said Ueom Jung-sik, a doctor at Gacheon University Gil Medical Center, "where stricter measures such as the reinforcement of social distancing rules take place to control the number of infections, even if vacancies remain in other regional hospitals.”

However, private hospitals, especially large university hospitals, are hoping they won't have to reserve 3 percent of sick beds as it could force them to turn away non-Covid cases.

“About 15 to 20 percent of our ICU beds are already being used for Covid-19 patients,” said one university hospital doctor.

“It’s also the time of the year when we get the highest number of critical cases because of the flu. They can’t just tell us to leave beds empty.”

In order to protect students from catching the virus, the Ministry of Education announced on Thursday that it will run a “special inspection period” for two weeks.

During this period, officials will inspect areas  high school students visit frequently, such as hagwon (cram schools), PC bang (internet cafes) and norebang (karaoke rooms) for any violations of the “With Corona” policies.

The ministry also designated 273 beds for CSAT-takers who test positive for the virus so they can still take the test in a hospital.


All students, even those who test positive for Covid or have to be quarantined, will be allowed to take the exam, as was true of last year’s exam.

According to the Korea Disease Control and Prevention Agency (KDCA) on Thursday, the daily caseload on Wednesday was 2,482, bringing the total caseload to 373,120.

The number of deaths surged by 24, the highest increase since January.

The number of critically ill patients in ICUs went down by 13, but still remained high at 365 patients.

Before Korea began its phased return to normalcy on Nov. 1, the number of critically ill patients was in the low 300s.

Starting Monday, the country adopted a new set of “With Corona" policies, which are akin to “Living with Covid” measures elsewhere. Under the new scheme, the country is to focus more on managing seriously ill patients rather than trying to stop infections. The idea is that with the high rate of vaccinations in Korea, Covid-19 will become like other infectious respiratory diseases such as seasonal influenza, producing much fewer hospitalizations and deaths than earlier in the pandemic.

One step ahead of humans (KOR)