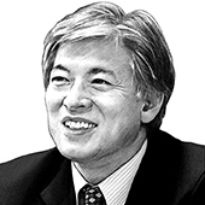 
Democracy is in crisis. Political leaders engage in politics of division, relying on fandoms like celebrities. Japanese Prime Minister Shinzo Abe became the longest-serving prime minister in Japan’s constitutional history with eight years in office, but major policies such as Pacifist Constitution revision and Covid-19 response failed and left few notable accomplishments. His showy diplomacy, as well as the worst-ever relations with Korea and China, were performances for domestic appeal. While he had strong approval rating of over 30 percent through his tenure, he succeeded in serving three consecutive terms by dividing the people.

Professors Kang Sang-jung and Tatsuru Uchida, both notable intellectuals in Japan, analyzed Abe’s politics in their new book, “New World Order and the Future of Japan.” It takes lots of effort for political leaders to communicate with people and reach consensus. But the cost of governing is less if they divide the people into friends and foes and make them fight. Policy decisions become simple when they listen to their own side’s stories, care about their interests, and exclude the other side in the policy-making process or distribution of public interests completely.

The ruling party supporters are intoxicated with the sense of unity and victory as they see the other side being ignored. They feel that the government they support is strong and support the government even more avidly. Meanwhile, the opposition group becomes more distant from politics. This was Abe’s victory formula for a long reign. But Prof. Uchida criticizes that it is politics only for the Liberal Democrats and supporters, not for the future of Japan.

In her book “Political Tribalism,” Yale University Law Professor Amy Chua asks how collective instincts determine the fate of a nation. When our side and the other side are divided, groups feel a sense of crisis, become more united, closed and defensive, and engage in politics with hostile attitude. Just like the spectators who watch a vulgar and violent professional wrestling match that was scripted in advance and are deceived that their side is winning, Trump’s political strategy and political behavior of the supporters deceived voters.

They make accusations of things going against their own interests as fake news. They harshly attack their opponents and make their supporters feel bliss. Prof. Chua warns that with political tribalism, once they take power, they don’t give up easily. The characteristic is evident as Trump supporters alleged electoral fraud, broke into the Capitol and still strongly promote Trump as the next Republican presidential candidate.

Democracy feeds on compromises and concessions. Even if it is a majority vote, it is not democratic if 51 percent unilaterally ignores 49 percent by skipping a reasonable discussion that can convince the other side. Chicago University Professor Martha Nussbaum advocates core values of democracy. She argues that democracy is built on respect and concerns, and respect and concerns are built on the ability to perceive others as individuals, not as objects.

The United States became the most powerful country in the world in 200 years after the independence, but it is said to have stopped in 1968. In the year of the presidential election, Democratic presidential candidate Robert Kennedy, who believed in hopes of morality and dignity, was assassinated. When American values were shaken by civil rights oppression of African Americans and the Vietnam War, Kennedy told supporters what made them feel embarrassed. It was a politically dangerous strategy, but Kennedy showed the courage of sincerity for the three months of the last campaign.

In his book “The Last Campaign,” Thurston Clarke wrote about Kennedy’s speech at Indiana University. He said we must not forget that the truly constructive power in the world does not come from bombs but from creative ideas, warm compassion and generosity and that these cannot be created by PR experts but are the instincts of the people who don’t have arrogance to be hostile to others, who don’t mistakenly think they are more superior than others, who pursue grace and human dignity from their works and who have ideals strongly rooted to the reality of the society we crated.

Today, the democracy clock seems to have stopped after the democratization in the past. What are the values and visions that Korean candidates have in the “last campaign” for next year’s presidential election? Will it be a mud fight of vengeance to eradicate deep-rooted evils, populism enticing the people, negligence of morality and dignity, fake news of slander and exposure, and political tribalism to animate the other side? I hope to see dignified political leaders who know well — and can implement — visions for the future and democratic values rather than the leaders of division encouraging discord among regions, classes, genders and generations and only calculating votes. If that’s not possible, we need to calmly prepare a systematic assessment system on elected politicians for the future of our democracy before it’s too late.