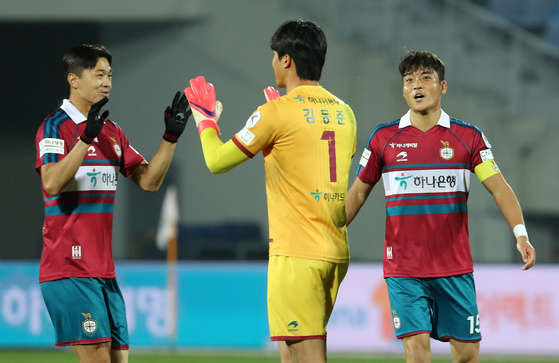 Daejeon Hana Citizen players celebrate after drawing with the Jeonnam Dragons in the first round of promotion playoffs on Wednesday. [YONHAP]


With a few weeks left of K League 1 action, Gangwon FC and Gwangju FC are currently fighting to avoid relegation. Down in the K League 2, which has already finished for the season, Gimcheon Sangmu have locked in a ticket to the first division, while Anyang FC and Daejeon Hana Citizen will face off on Sunday for their shot at promotion.

Gimcheon locked in a promotion early on with a 1-0 win over Bucheon FC on Oct. 17, then went on to beat the Jeonnam Dragons 3-1 and tie 2-2 with Busan IPark to round off their season.

Daejeon is now wrapped up in the middle of the K League's unusual promotion system, where the No. 3 and No. 4 teams in the K League 2 play each other to earn the chance to play the No. 2 team in a playoff. The winner of that playoff then advances to another playoff against the second-to-last team from the K League 1, and the winner of that game gets to stay in the top tier.

With No. 3 Daejeon tying 0-0 with No. 4 Jeonnam on Wednesday, Daejeon are now one step closer to earning a chance to play next to Gimcheon in the first division next season. As the higher-ranked team, Daejeon advances to the playoff against K League 2 runner-up Anyang.

There have now been a total of eight K League 2 playoffs since 2013, when the K League 2 champion first started being promoted to the first division. The only time a lower-ranked team has advanced to the playoff was in 2014, when Gwangju FC won and became a first-division club. Out of the eight matches ahead of the playoffs, four of them ended in draws including Wednesday’s, and the higher-ranked team advanced.

Daejeon have been on good form lately, scoring 11 goals in the last five matches. They also have the second-most goals this season in the K League 2, with 53 goals, seven behind Gimcheon Sangmu.

Daejeon haven't been relying on one high-scorer to do the bulk of the work. Instead, the goals are spread out across different players, which is a good sign for the club. There are more than 10 players who have scored at least two goals this season. Park Jin-sub and Won Ki-jong both have four, and the best scorer is Masatoshi Ishida, who has nine goals, seven of which were in the last five games.

Daejeon will face Anyang on Sunday and the winner of that game will then face the second-to-last K League 1 club. As of press time, Gangwon FC are in that second-to-last spot and Gwangju are in the guaranteed relegation spot.


With potential relegation looming, Gangwon made the decision to sack head coach Kim Byung-soo on Thursday after an unsuccessful season. Kim has been with Gangwon since August, 2018.

Gangwon are yet to play three more matches against Incheon United, FC Seoul and Gwangju. Assistant coach Park Hyo-jin will take over as interim coach for Sunday’s match against Incheon. No further information on future management moves has been announced.