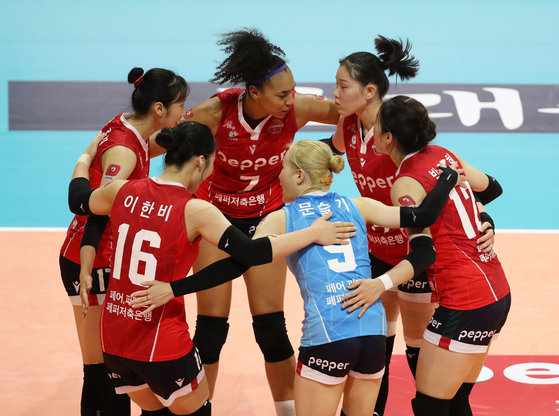 The Pepper Savings Bank AI Peppers players gather during a match against the GS Caltex Seoul Kixx on Oct. 22 at Pepper Stadium in Gwangju. [YONHAP]


The Pepper Savings Bank AI Peppers, the most recent addition to the seven-club women’s V League, have been struggling against the more seasoned clubs at the start of the new V League 2021-22 season.

The Peppers have played four matches so far and have dropped all four — 3-1 to the Korea Ginseng Corporation Pro Volleyball Club, 2-0 to both the GS Caltex Seoul Kixx and Korea Expressway Corporation Hi-pass, and 3-1 to the Incheon Heungkuk Life Pink Spiders on Tuesday.

The Peppers were added to the league only this April, marking the first time in 10 years that a new club has joined the V league, after the Industrial Bank of Korea founded the Hwaseong IBK Altos in 2011.

It was expected that the Peppers would undergo a trial and error period, especially because the team consists of new blood rather than tried and tested players.

The Peppers even had to miss out on the KOVO Cup in August as were only able to put players together this September during the V League rookie draft that was held one month ahead of schedule to allow the club to prepare the new squad for the 2021-22 season.

Considering that they were not able to play a single match as a team before and did not have enough time to coordinate, the fact that the Peppers have not dropped every single match in straight sets shows some potential.

The Peppers currently sit at the bottom of the standings with four losses alongside the Industrial Bank of Korea Altos. The Hi-pass are in fifth place, the Pink Spiders in fourth, Daejeon KGC in third, the Seoul KIXX in second and Suwon Hyundai Engineering & Construction Hillstate out in front in first place with five straight wins.

The Peppers face a challenge on Friday as they take on the Hillstate at Suwon Gymnasium in Suwon, Gyeonggi at 7 p.m.