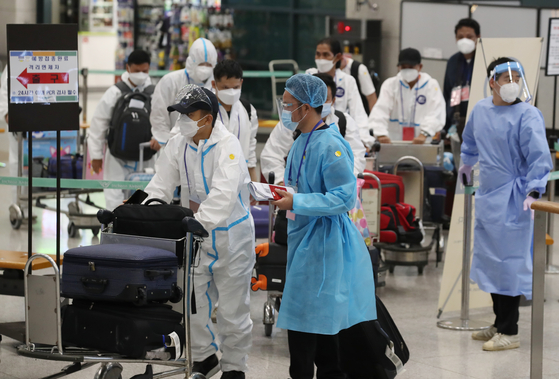 People entering Korea at the arrival hall in Incheon International Airport in October. The Employment Ministry announced that the government is relaxing its regulations to allow more foreign workers E-9 visas to enter the country as SMEs and farms are shorthanded. [YONHAP]

Caps on manual laborers entering Korea on E-9 visas have been lifted, while workers from five countries that have been prohibited from entering under the visa category can now apply.

Korea has been limiting entries to 600 a week for people on E-9 visas due to the pandemic, but now with the vaccine rate near 80 percent and companies in need of workers, temporary limits are being abandoned.

With the end to the quota, the 50,000 foreign workers waiting to enter the country can now begin the process.

These are foreigners working mostly in factories and on farms, which have been shorthanded since the Korean government restricted the entry of such workers from developing countries due to the global pandemic.

The new rules come with conditions.

Workers from the Philippines, Myanmar, Pakistan, Uzbekistan and Kyrgyzstan, who have been prohibited from entering, have to have documents that prove that they have been fully vaccinated with World Health Organization approved vaccines and that 14 days have passed since.

They will also need to get a document that proves they have a negative PCR test from a hospital recognized by Korean embassies and consulates within 72 hours of boarding the plane.

These are countries the Korean government considers to be high risk in terms of Covid-19.

The Employment Ministry said it expects foreign workers from these countries to start arriving in Korea around end of the month.

Workers from 11 countries — Cambodia, Vietnam, Thailand, East Timor, Laos, China, Nepal, Sri Lanka, Mongolia, Bangladesh and Indonesia — are only required to get a PCR test before boarding regardless of whether they have been fully vaccinated.

Those not fully vaccinated will have to complete their vaccination course once in the country.

All foreign workers on E-9 visas, vaccinated or not, will have to quarantine for 10 days in a government designated facility.

According to the Employment Ministry, the number of such foreign workers that entered Korea since Covid-19 broke out was around 6,000 to 7,000. That’s a significant drop from 50,000 annually before the pandemic.