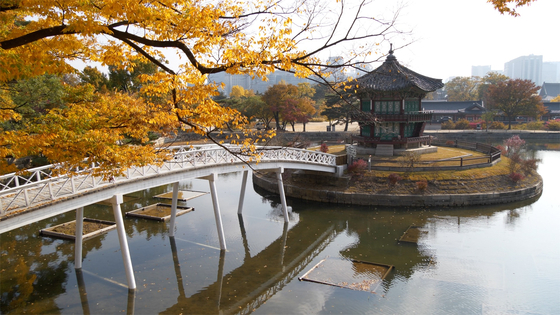 The restoration of the historical Hyangwonjeong Pavilion located at the center of Hyangwonji Pond and the bridge connecting it called Chwihyanggyo inside Gyeongbok Palace in central Seoul, has finally come to an end and was revealed to the public on Friday. Hyangwonjeong used to be a haven for the king and queen to rest. The pavilion is believed to have been built in 1885 during King Gojong’s reign. The bridge was destroyed during the Korean War (1950-53), and was reconstructed with a different design in 1953 to the south of the pavilion, instead of the north, where it used to be located. When the Cultural Heritage Administration had to restore the lopsided pavilion in 2018, it also decided to restore the bridge to its original location, with its original arched design. [CULTURAL HERITAGE ADMINISTRATION]