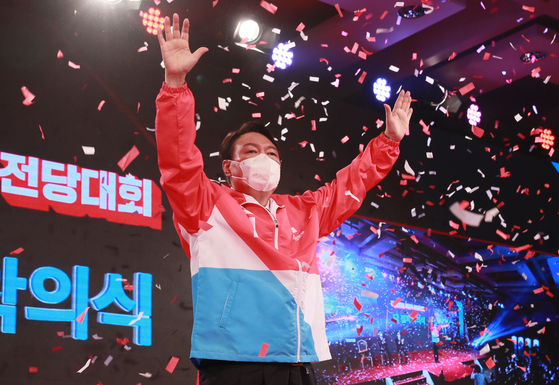 Yoon Seok-youl acknowledges the crowd at the Kim Koo Memorial Hall in Yongsan district, central Seoul, after Friday's announcement that he was the People Power Party's candidate for the March 2022 presidential election. [PRESS POOL]

The party's candidate nomination committee announced Yoon won the primaries with 347,683 votes, or 47.85 percent, a little past 2:30 p.m. at the Kim Koo Memorial Hall in Yongsan district, central Seoul.

Yoon, who joined the party in July after resigning as prosecutor general in March following clashes with the administration of President Moon Jae-in, triumphed over lawmaker Hong Joon-pyo, the party's nominee in the 2017 presidential election, who received 40.1 percent of the primary votes, former lawmaker Yoo Seong-min and former Jeju Governor Won Hee-ryong.

The former prosecutor general has shown little appetite for party loyalty, and that inclination led him to butt heads with Lee as Yoon publicly wavered over joining the party whose fall from power he had played a significant role in.

Yoon built his public reputation as a state prosecutor by conducting investigations into allegations that the National Intelligence Agency ran a covert operation to influence public opinion through online comments ahead of the December 2012 presidential election in favor of then-ruling party candidate Park Geun-hye.

The investigation, which began after Park took power, raised the ire of her administration and resulted in his demotion, which Yoon later exposed as the result of political pressure.

At the time of that explosive revelation, Yoon famously said, "I do not show allegiance to people."

Yoon returned to the national spotlight in 2016 as he led an investigation into the scandal that ultimately brought down Park – that her close friend and aide Choi Soon-sil had exercised her access to and influence over the president to amass bribes from major Korean companies and advance Choi's daughter's academic and equestrian careers.

After Park's impeachment and removal and President Moon Jae-in took power in a landslide victory in the May 2017 presidential election, Moon selected Yoon as chief of the prestigious Seoul Central District Prosecutors' Office and then as prosecutor general in July 2019.

However, Yoon lived up to his famous words when he launched a corruption investigation into Cho Kuk, a close aide of the president and his nominee for the post of justice minister.

What brought protesters back on the streets en masse was the allegation that Cho – a longtime academic crusader for greater social equality in Korean society – and his wife had forged academic credentials and research authorship for their daughter so she could gain admissions to medical school.

Yoon's investigation into Cho led to Cho's quick resignation from the justice minister post, souring relations between the prosecutor general and Moon's administration.

Relations between Yoon and the Moon administration took a further spiral downward after Cho's successor Choo Mi-ae pushed the president's agenda for prosecutorial reform to prevent the service's alleged tendency to conduct political investigations – a move viewed by critics as an attempt to prevent a repeat of the probe into Cho.

Yoon opposed the government's plan to defang the prosecution's investigative powers, and his defiance of Choo led to the justice ministry suspending him for two months.

In an administrative court showdown, Yoon's suspension was lifted through a court injunction, but he eventually resigned in March with four months left in his two-year tenure after the government announced another plan to strip the state prosecution service of yet more powers.

In an allusion to his struggles with both the administrations of Park and Moon, Yoon said in his acceptance speech that he would "achieve a change of government without fail and end the politics of division, acrimony, corruption and plunder."