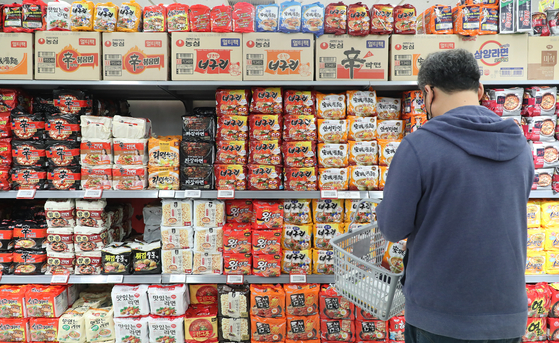 A customer looks at ramyeon products on display at a supermarket in central Seoul on Sunday. The price of ramyeon rose by 11 percent in October compared to the same month last year, the highest surge in almost 13 years since February 2009 when ramyeon prices soared by 14.3 percent on year. [YONHAP]


The increasing costs of wheat, oil and corn around the world are ringing alarm bells in Korea.

The consumer price index for foods is on the rise, due to the nation's reliance on imported grain for processed food products.

The price of ramyeon products rose by 11 percent in October compared to the same month last year, the highest surge in almost 13 years since February 2009 when ramyeon prices soared by 14.3 percent on year. Since August this year, major ramyeon manufacturers such as Ottogi, Nongshim and Samyang have been raising their prices citing increased wheat and palm oil costs.

The rise in prices of raw ingredients does not immediately affect the consumer price index but shows in the following months, according to Statistics Korea.

Prices of noodles also rose last month by 19.4 percent on year, as did biscuits by 6.5 percent, pasta by 6.4 percent, bread by 6 percent and snacks by 1.9 percent.

The increasing cost of grain — namely wheat and corn — is the reason for the inflation, according to experts.

In 2019, 76.7 percent of grain consumed in Korea, or 16.11 million tons, was imported from overseas, making Korea the seventh largest grain buyer in the world. The surge in prices of ingredients has led prices of consumer goods such as ramyeon, bread, oil and mayonnaise to follow.

According to the Korea Rural Economic Institute (KREI), the price of imported wheat was $344 per ton in October, 19.9 percent higher than the same month last year. During the same period, a ton of beans cost $618, a 58.1 percent increase on year, while a ton of corn cost $359, or 83.2 percent higher.

“If the price of imported grain rises by 10 percent, then that brings up the consumer price index by 0.39 percent in Korea,” said Kim Jong-in, a researcher at the KREI.

The consumer price index for October rose by 3.2 percent compared to the same month last year, the steepest surge in nine years and nine months according to Statistics Korea.

The price of bread and grain rose by 6.2 percent in October compared to last year, while the price of cooking oil rose by 8.4 percent during the same period.

The upward trajectory of grain and oil may continue and subsequently lead to even higher year-end prices.

The price of key food commodities has been rising around the world due to worsening supply and increasing demand, according to the Food and Agriculture Organization (FAO) of the United Nations.

The FAO Food Price Index for October rose by 31.3 percent on year, after rising for three consecutive months since July, according to the latest update made on Nov. 4. The price index also recorded its highest level since July 2011.

The FAO Cereal Price Index, which includes the price of grain and wheat, in October rose by 22.4 percent compared to the same month last year as the prices of major cereals all rose, according to the FAO.

“World wheat prices continued to surge for a fourth consecutive month, rising by a further 5 percent in October, to stand 38.3 percent higher year-on-year, and reaching their highest level since November 2012,” the report said.