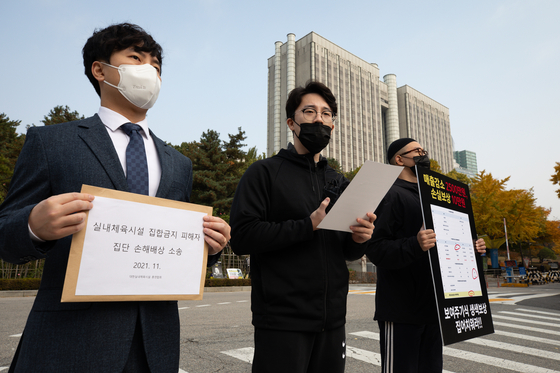 
Gym owners are mad as hell at restrictions on their businesses in the past couple of years — and ones coming in the future. And they're going to court to say they're not going to take it anymore.

Some 350 gym owners and employees participated in the suit.

“Indoor sports facilities for the past two years have been subject to gathering bans and business operating restrictions without getting any proper compensation,” said KIFA spokesperson Park Joo-hyung.

Gyms were closed for public health reasons from last Dec. 8 to Jan. 18 in greater Seoul and faced restrictions on operating hours until recently. The bans on gatherings beyond a certain size made classes for yoga and other exercises impossible.

Along with restaurants and cafes, gyms have been enjoying eased social distancing regulations since Nov. 1, but a new vaccine pass system is bad news for gyms, and the owners are getting exercised.

“Gyms are suffering even bigger damages due to the implementation of the vaccine pass,” said KIFA spokesperson Park. "We are suing so we won’t be subject to unfair administrative policies in the future."

The vaccine pass system will be used in places where virus transmissions are particularly likely, which include noraebang (singing rooms), public bathhouses and indoor sports facilities such as gyms. Under the system, which starts in earnest on Nov. 15, people need to prove they are fully vaccinated or show negative polymerase chain reaction (PCR) results issued within the last 48 hours.

“With the implementation of the vaccine pass, we had to refund gym memberships for unvaccinated customers, which was some 15 percent,” said spokesperson Park.

Mr. Kwon, a 30-year-old employee of a gym in Yeouido, western Seoul, said he is being overwhelmed by refund requests.

“[The requests] are mostly from unvaccinated pregnant women or people who had their first dose of the vaccine, but decided not to have the second dose due to side effects,” said Kwon. “They are basically not allowed to use our facilities, and there's nothing we can do even if they ask when they can use the gym again.”

According to a survey of 988 gym, Pilates studio, indoor golf driving range and billiards hall owners conducted by the People's Solidarity for Participatory Democracy, 99 percent said their sales last year were down compared to before the pandemic. Among the 99 percent, 35 percent said sales were down 40 to 60 percent on year.


“The purpose of gathering bans weren’t to entirely shut down businesses, but they've been misused,” said Bae Tae-hyun, a lawyer from the law firm LIN, which is representing the gym owners. “Making people temporarily close businesses and not giving proper compensation goes against people’s rights to equality.”

The 3.4-billion-won compensation was calculated by taking into consideration fixed costs that can be proved by paperwork such as rent, wages and insurance.

“As a part of society, we participated in helping overcome Covid-19," said spokesperson Park. "We’re just asking compensation for costs that had to be paid during the ban imposed on us but not all other businesses."