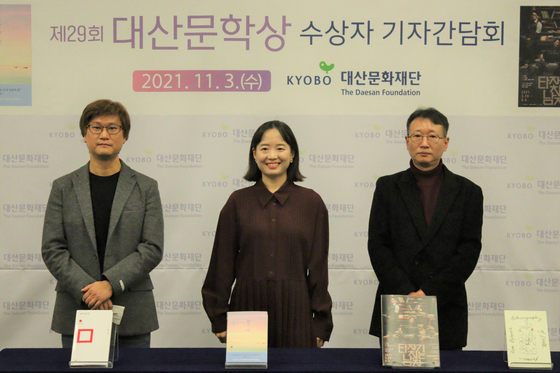 
Four winners were named at the 29th annual Daesan Literary Awards on Wednesday.

Run by Daesan Foundation, a cultural organization by Kyoto Life Insurance, the awards chose talents who excel in writing novels, poems and theater plays as well as translating Korean content into other languages.

Poet Kim Un, novelist Choi Eun-young, playwright Cha Geun-ho and translator and poet Choi Don-mee were selected for the award, and each will receive a prize of 50 million won ($42,000). The award ceremony will be held on Nov. 29.

Kim, in his book of poems “To: Blank Paper” (translated), shares his thoughts about himself when he feels sad, and Choi's novel “Bright Night” (translated) highlights women from four different generations and encourages others to listen to the voices of women, Daesan Foundation said while explaining why the particular works are chosen.

Cha’s play “Man Typing on A Typewriter” (translated) shows the damages that can be done through oppression enforced by people with power, while Choi, through her translated work of poet Kim Hye-soon’s “Autobiography of Death,” provided vivid descriptions of how people generally mourn the death of someone in Korea, the foundation explained.

The judges selected by the foundation mostly reviewed works released from within August last year until July this year, but plays from the past two years and translated works for the past four years were also eligible. The foundation aims to choose works that provide “insights through the writer’s unique viewpoint to better understand humans and society while showing the literary spirit of the present.”

“Many playwrights question our identity, whether we are a literary writer or a play entertainer,” said Cha, a playwright with 24 years of experience, during a press conference on Wednesday. "This award gives me a reason to bring myself to find that answer, and it inspires me more to continue to write about historic incidents, so that we can think once more about dilemmas we face."