DKB wants to be your best friend, but expect a 'Rollercoaster'

DKB wants to be your best friend, but expect a 'Rollercoaster' 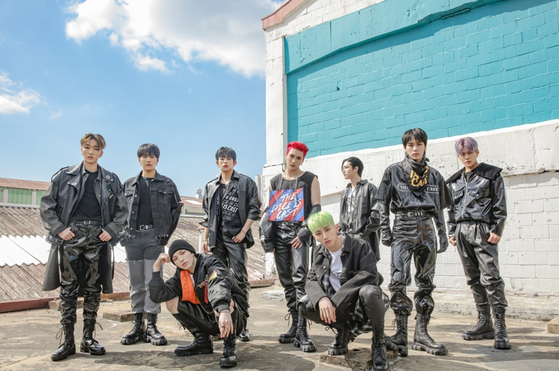 
Boy band DKB of Brave Entertainment is hoping to roll into the hearts of the public with its new digital single “Rollercoaster.”

The nine-member band, which was produced by rapper Brave Brothers and debuted in February, released the new digital single on Oct. 28, showing off their own take on hip-hop in song and dance.

"Rollercoaster," which combines hip-hop and R&B, tells of the love and pain one continuously cycles through while in a relationship, as if on a rollercoaster.

The band has also been recognized for being in the same management company as Brave Girls, a hit girl group in the entertainment scene.

“Listeners will be able to feel our own style of hip-hop,” the members of the band said during an interview with Ilgan Sports, an affiliate of the Korea JoongAng Daily. “We hope this song helps us appeal better to fans as someone who is friendly, someone fans want to become best friends with.”


Q. How does it feel, entering the entertainment scene again with another release?

A. E Chan: First of all, I’m happy that we were able to show some new sides of us for our fans who have been waiting for us during the past seven months while we were away. We made it onto Melon’s new song chart as we made more appearances on music TV programs. I feel proud because it seems like more and more people are getting to know us better.

D1: Our group is based around hip-hop, so we will continue to incorporate these hip-hop elements into our music. We also want to use addicting melodies that get stuck in your head so that the songs feel very comfortable and familiar. So when we write our lyrics, we try to avoid addressing any heavy subjects or using big words. Instead, we try to talk about situations that commonly happen in our lives — we want to make music that can be understood by many.


There are so many idol groups in the entertainment scene. What’s DKB's strength?

Harry-June: We are very confident in our dance moves. We all have different styles, and we often enjoy going freestyle during our leisure time. We would never lose in a dance match. Of course, we still have a lot that we lack in, but we hope to show some improvements each time we release new work.


What do you want to be known as?

GK: We want to be called a “best friend.” Due to the pandemic, we didn’t get much of a chance to meet with fans. We hope the situation gets better so that we can get closer to fans and they can call us their “best friend.”


If one of your songs was to climb back up the charts, which song do you wish it would be?


Lune: The lead track of our third EP “Work Hard” is probably the one that’s most known by the public. I think it's a song people can really enjoy as they work. If that song ever climbs back up the music charts, we will all perform the song, wearing whatever suits the fans want.


Is there any entertainment show you would like to go on?

Heechan: We would be thrilled to go on any entertainment show. We are all prepared to give it all we've got. It would be great to take part in anything in which we can show our performances.

Yuku: DKB is a really fun group when all the members get together, so I think it would be really fun to make our own entertainment show. That’s one way, I think, to make our fans fall even more in love with us.


What goals do you have for now?

Junseo: It was really fun and exciting to go to a TV studio for the first time in a long time to share our comeback. We were able to show more passion in our onstage performance since it had been such a long time. We will continue to put our all into our promotions for this song. Another big goal is for us all to stay healthy and happy.