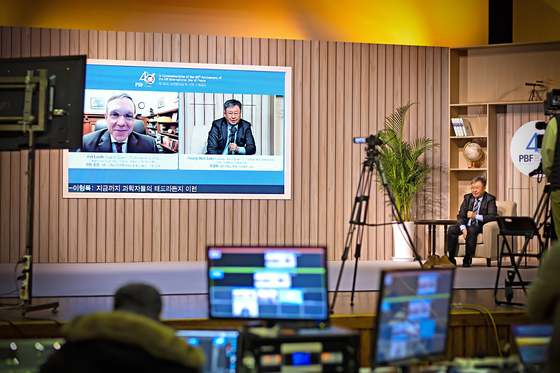 Professor Lee Hyeong-mok, right, speaks during the third dialogue session of Kyung Hee University System’s Peace BAR Festival at Kyung Hee University on Oct. 29 under the theme of “The Arrival of Extraterrestrial Intelligence in the Solar System: Will the Identity and Destiny of Earth be Rewritten?” He is joined virtually by Prof. Avi Loeb. [KYUNG HEE UNIVERSITY SYSTEM]

Scholars discussed the possible existence of intelligent life beyond Earth and set the stage for rethinking the meaning of human civilization in a broader sense at Kyung Hee University System’s Peace BAR Festival.

The third dialogue session of the forum, in recognition of the United Nations’ International Day of Peace, was held in Seoul last Friday under the theme of “The Arrival of Extraterrestrial Intelligence in the Solar System: Will the Identity and Destiny of Earth be Rewritten?”

Divided into two parts, Prof. Avi Loeb, a chair professor at Harvard University's department of astronomy who has championed research challenging Earth-centered conventional views on the universe, first gave a lecture virtually and was joined by Seoul National University physics and astronomy Prof. Lee Hyeong-mok as the moderator for the open discussion.

Prof. Loeb started off his lecture by stating two things he has learned over the several decades of his astronomy practice: a sense of cosmic modesty and the existence of another planet like Earth.

“Not only that we are not at the center of the universe, as people thought thousands of years ago,” he said, “but also what we find in our backyard is not special, not privileged.”

Loeb mentioned the Galileo Project he and his colleagues launched in July, aimed at developing an artificial intelligence-powered network of telescopes that can search for evidence of technological alien civilizations on or near Earth. The project was revealed about a month after the U.S. Department of Defense recognized the existence of unidentified flying objects (UFOs), referring to them as unidentified aerial phenomena, or UAP.

“We know from observing the universe that most stars [were formed] billions of years before the sun,” he explained. “Since many of [the stars] have a habitable, Earth-sized planet, it is possible that a technological civilization similar to ours predated us by a billion years or more.”

Loeb published a study suggesting that Oumuamua, the first interstellar comet ever discovered in our own solar system in October 2017, was not simply an interstellar celestial body but an artifact potentially created by extraterrestrial intelligence. This name Oumuamua — meaning “first messenger from afar” in Hawaiian — was given by the Pan-Starrs team.

“We simply try to get to the bottom of this question: What is the nature of these unidentified aerial phenomena? What is the nature of objects, like Oumuamua?” he said, suggesting that Oumuamua may have been a lightsail floating in interstellar space as debris from advanced technological equipment, either launched in our direction or anchored like a buoy in space, where we ran into it on our planet’s travel around the galaxy.

“And my hope is that if we find a smarter kid on our cosmic block, a much more advanced civilization, that will inspire us to see our differences as meaningless and to treat each other with respect as equal members of the human species,” he said.

Lee started off by asking where Loeb thinks scientific innovation or creativity in his field usually comes from.

Citing that the scientific community ignores the possibility of extraterrestrial origin, Loeb offered the criticism that oftentimes people in academia pretend to know everything in a subject area, and if nature presents new evidence to suggest something different, the expert just shoves it under the rug and pretends that it's nothing new, tending to be reluctant to admit they were wrong or didn’t actually know.

“The knowledge that we have is just an island in an ocean of ignorance,” he said. “And if we operate with modesty, admitting when we don't know something and trying to learn from the facts, we have a chance to make progress.”

Lee then asked about what Loeb, as a scientist, thinks the advantages are of having early access to humanities in classical literature.

Loeb stressed the advantage of having a philosophical mind. “For me, the question, ‘Are we the smartest kid on the block or not,’ is one of the most fundamental in science, because if there is some equipment flying out there, we might import it to Earth, and that would have huge financial implications,” he said. “It will change also our aspirations for space and the way we perceive ourselves in the universe, and we can learn from them [as] we are just 100 years into our scientific development.”

Given that most people already believe in the universality of the laws of physics and accept the fact that the earth is just one of countless planets, Lee questioned what changes this could bring to our knowledge.

Loeb responded, “First of all, that would be a change in our psychology.

“If the technologies we discover are far more advanced than what we can produce, then there would be a sense of humility that will come with discovering them,” he explained.

He said the real fundamental question is how to interpret them.

“If humans are not the pinnacle of creation in the universe, […] and if we realize that, in fact, we are not alone and that there is a lot of civilizations out there […] that is superior to us, that would be a psychological shock that will change everything in our future,” Loeb said.

Due to social distancing guidelines, all sessions from the Peace BAR Festival are held via video conference, which can be livestreamed online (pbf.khu.ac.kr). The next dialogue session titled “The Age of Climate Change: How can we survive the crisis?” will be held on Nov. 26.

More students are dropping out for a hopefully better future