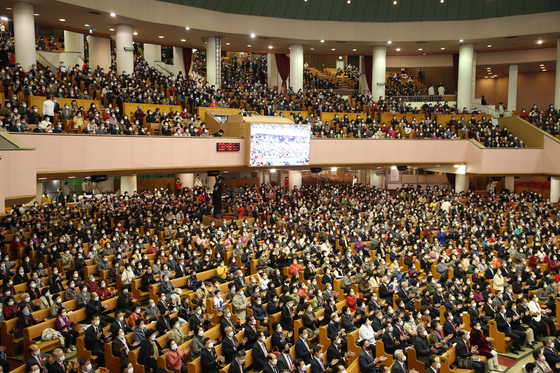 Yoido Full Gospel Church in western Seoul is crowded with people attending worship services on Sunday, the first weekend after Korea shifted to its "With Corona" policy. Under the new rules, in-person worship services can accept up to 50 percent of their capacity regardless of attendees' vaccination status. [NEWS1]


Korea reported more than 2,000 Covid-19 cases for a fifth consecutive day on Sunday, fueling concerns over a virus resurgence amid the country's return to normalcy.

According to the Korea Disease Control and Prevention Agency (KDCA), the country registered 2,224 new coronavirus cases Sunday, including 2,204 local infections, raising the country's accumulative caseload to 379,935. The daily tally marks a rise of 163, or 7.9 percent, from last Sunday's figure.

Health authorities expect infections to surpass 2,500 from the middle of this week when more tests are conducted, and issued administrative orders to secure more hospital beds in medical institutions in the greater Seoul area in preparation for as many as 7,000 daily cases.

Eleven more virus deaths were reported on Sunday, raising the death toll to 2,967.

In line with the increasing Covid-19 patients, hospital beds are filling up quickly.

Out of 1,121 Covid-19 intensive care beds across the country, only 552 were available as of Sunday, the KDCA said. The current occupancy rate stands at 49.2 percent, an increase from the 42.1 percent rate a week ago.

The government earlier warned it would initiate a circuit breaker, or an emergency plan of halting the "With Corona" strategies, when 75 percent of intensive care beds are full, which is considered to be the maximum limit on the country's medical system. Given the current pace, it is expected that the government will have to reintroduce stricter restrictions, as well as expand the scope of vaccine pass requirements, around Nov. 29.

Inoculations for those aged between 16 to 17 began last month, while those aged 12 to 15 are now also eligible for vaccinations from this month.

With the need for boosters becoming more important, starting Monday, Janssen recipients who got their shot at least two months ago will be able to receive another vaccine. A booster shot refers to an extra dose of a vaccine after the initial series of injections to boost immunization.

Korea earlier approved frontline medical personnel treating virus patients, people over the age of 60, patients and employees in old age homes and people with weakened immune systems — estimated to be around 3.69 million — for booster shots and began administering them last month.

Most booster shots will be mRNA-based vaccines — Pfizer or Moderna — and the authorities advise people to get the same vaccine they previously received. Only those aged 30 and older are eligible for booster shots of the Janssen vaccine.

Despite the expansion of the booster shot program, from this month, inoculations at consigned medical institutions nationwide have been reduced to only three days a week, and more and more vaccination centers are being closed as more than 80 percent of the population have been partly vaccinated.

More than 80.9 percent of the country's population received one dose of a Covid-19 vaccine as of Saturday midnight, the KDCA said, while 76.6 of the population have been fully vaccinated.

Along with the country's transition into a gradual return to normalcy, nighttime alcohol consumption along the Han River in Seoul will be permitted again from Monday.

According to the Seoul Metropolitan Government on Friday, a ban on drinking in parks along the Han River from 10 p.m. to 5 a.m., which was adopted in July amid the fourth wave of pandemic, will be scrapped at Sunday midnight.