Conservation groups look to save flora and fauna in DMZ

Conservation groups look to save flora and fauna in DMZ 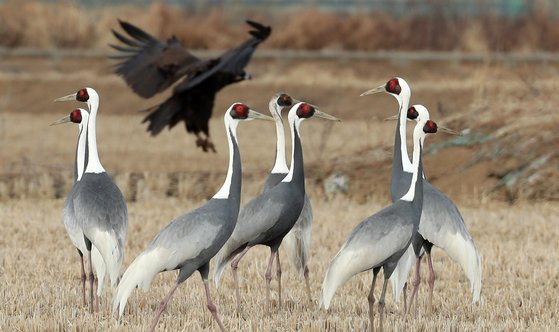 A flock of red-crowned cranes and a hawk are seen on the plains of Cherwon County, Gangwon, near Korea's demilitarized zone. [YONHAP]


Emblematic of peace on the Korean Peninsula, the demilitarized zone (DMZ) also serves as a unique sanctuary to rare flora and fauna.

But the conclusions drawn by speakers at the DMZ Biodiversity Conservation meeting, attended by the National Institute of Ecology and other environmental groups last week, say that the 160-mile-long treaty zone’s ecological treasure troves are in “dire need of protection.”

“As more areas in the vicinity of the DMZ are allowing civilian entrance for profitable purposes, habitats of endangered animal and plant species are being pushed out,” said Hwang Ho-seop, director of Citizens’ Solidarity for Life and Peace, another environmental group at the meeting.

“The environment encircling the DMZ should be rigorously preserved as the conservation and restoration of the surrounding environment will serve as the foundation for the future of the two Koreas’ relations.”

During the meeting, the National Institute of Ecology identified six zones in the vicinity of the DMZ as ones needing immediate protection measures.

One of the selected areas for conservation was located in Cheorwon County, Gangwon.

Best known for its wintering birds, especially the red-crowned cranes, the plains of Cheorwon County are scheduled to be turned into a Peace Memorial Hall for the Korean War soldiers and an industrial complex, according to Cheorwon County Office.

The plains used to be protected by the DMZ’s Civilian Control Line, which limits urban development and human disturbance in the area.

However, that line has gradually moved northward in the past years to allow more space for tourism and development around the DMZ, and the fair plains have become pockmarked with construction projects.

“If more new buildings are erected in Cheorwon County, the cranes will no longer migrate there,” said Baek Jong-han, president of the Crane Conservation Association.

“Whether it be purchasing the land or designating it as a protected area, the local government and its residents all need to cooperate and hammer out ways to properly conserve the cranes’ habitat.”

Another area that needs immediate protection according to the National Institute of Ecology is located in Hwacheon County, Gangwon.

These deer have almost reached extinction due to uncontrolled poaching, and, according to data collected by the Ministry of Environment and the National Institute of Environmental Research, only a few remain in the DMZ.


To better protect the six areas, the institute proposed that they be divided into three categories — wetland conservation area, wildlife conservation area and ecological landscape protected area — and designate them as such so that they can't be used for a different purpose in the future.

“There are various laws related to nature conservation in the DMZ, but some of those laws conflict with each other and thus have become meaningless,” said Park Jin-yeong, head of the protected area research team at the National Institute of Ecology.

“This is why we need to take other measures to protect endangered areas.”

Containing 2,153 plant and animal species including 30 endangered species, the DMZ is a prominent natural preserve for biodiversity that has largely remained untouched by civilians.

The DMZ is a region on the Korean Peninsula about 30 miles north of Seoul that demarcates North and South Korea. It was established in the 1953 Korean War Armistice Agreement.

As the DMZ served as a point of communication between officials of the two Koreas in the recent years, such as during the 2018 Panmunjom Declaration, its has evolved to signify peace rather than division.