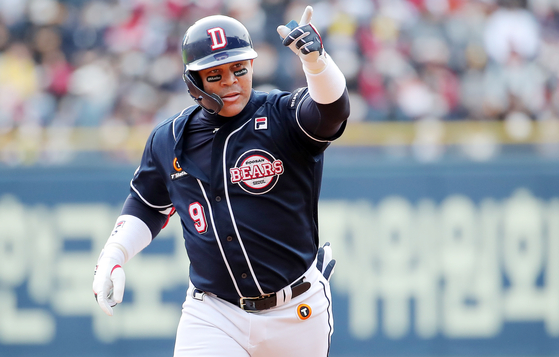 Jose Fernandez rounds the bases after hitting a two-run home run at the top of the third inning in the third game of the first round of the 2021 KBO playoffs against the LG Twins at Jamsil Baseball Stadium in southern Seoul on Sunday. [YONHAP]


The Doosan Bears have won the first round of the 2021 KBO playoffs, beating the LG Twins in the rubber match on Sunday to earn the chance to face the Samsung Lions in round two.

The Bears were on the attack from the start at Jamsil Baseball Stadium in southern Seoul, with Jung Soo-bin, the first batter up, hitting a single, and then immediately coming around to score off a double from Jose Fernandez.

The lead didn’t last long, as the Twins were able to capitalize on an early walk and string together a few hits to bring a runner home at the bottom of the first, tying the score at 1-1.

A two-run blast from Fernandez at the top of the third and another run at the top of the fourth helped the Bears start to pull ahead, before a massive six-run fifth including a bases-clearing triple from Jung put them up 10-1 at the midway point.

LG got one back in the sixth, but the damage was already done. The Twins made one last push in the ninth, adding one more for a final score of 10-3. LG go home empty-handed, having now failed to reach the Korean Series since 2002 or win it since 1994. 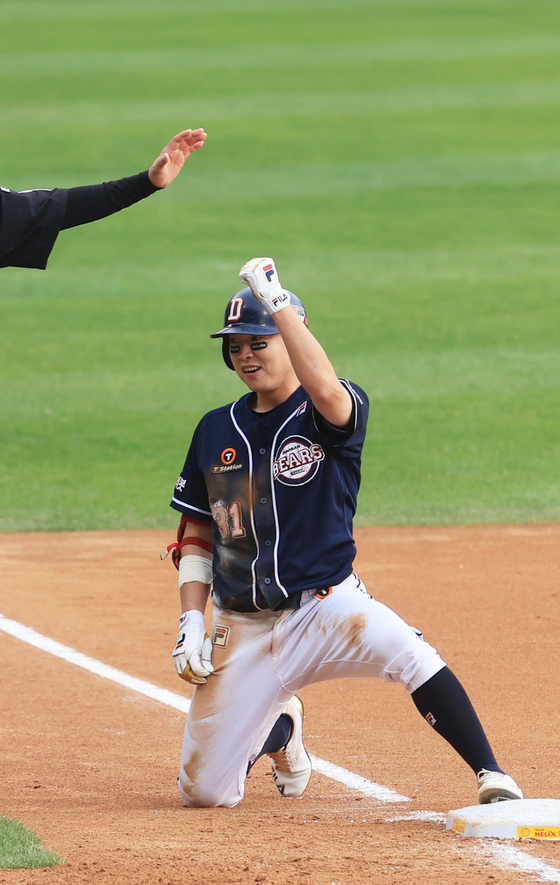 Jung Soo-bin celebrates after hitting a three-run triple at the top of the fifth inning in the third game of the first round of the 2021 KBO playoffs against the LG Twins at Jamsil Baseball Stadium in southern Seoul on Sunday. [YONHAP]


For Doosan the success fell solidly on the shoulders of Jung and Fernandez, who walk away from Sunday’s game with three hits and four RBIs each. Jung also proved crucial on defense, laying out multiple times to make big catches that prevented LG from building up any offensive momentum.

Despite the big win on Sunday, Doosan’s success in the series was far from guaranteed.

LG entered the playoffs well rested and with a higher regular season ranking than Doosan, but dropped the opening game 5-1 on Thursday, with the Bears taking a lead in the third inning and never letting it go.

After Thursday’s lackluster performance, it looked like the Bears might once again barrel through the Twins — last year, Doosan won the series 2-0 — but LG rallied spectacularly on Friday for a big 9-3 win to tie the series and force a third game.

Sunday’s rubber match settled that score, and the Bears will now advance to take on the Lions in the second round, starting Tuesday. 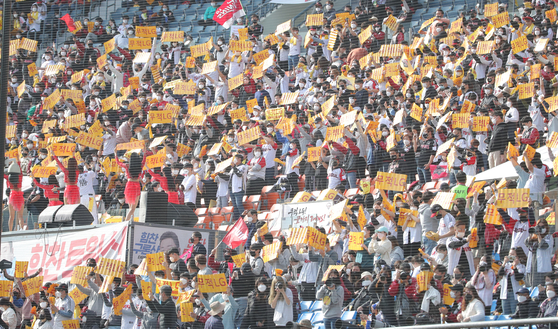 LG Twins fans cheer on their team during the third game of the first round of the 2021 KBO playoffs against the Doosan Bears at Jamsil Baseball Stadium in southern Seoul on Sunday. [YONHAP]


Doosan advanced to the playoffs as the underdog this season, after playing through the Wildcard Series against the Kiwoom Heroes last week.

That win gave the Bears some momentum going into the playoffs, momentum that they were clearly able to build on as they took on old rivals LG and proved that when it comes to fall baseball, the Bears are always dangerous.

Sadly for LG, their lopsided rivalry with Doosan played out much like it has for years. The Twins look stronger every year, but there’s something about the Bears that’s like kryptonite for the other Jamsil club.

Although LG finished four points above Doosan in the regular season standing, they only actually won one more game than their Jamsil rivals. Additionally, for the sixth consecutive season, the Bears had the advantage when it comes to head-to-head record.

In the 2021 season, the Twins beat Doosan six times, but lost seven with three ties. That 6-7-3 line put the Twins closer than they've been to Doosan in years, but still on the losing side. The last time the Twins came out ahead of Doosan on head-to-head record for the season was in 2014, by one game.

Doosan now advance to the second round of the playoffs, reigniting another old postseason rivalry with the Lions.

The Bears entered this year’s playoffs having appeared in the Korean Series for the last six straight years, a record run matched by only the SSG Landers and the Lions. That run started at the expense of the Daegu club.

For the best part of two decades, the Lions were a perennial playoff contender, appearing in every postseason bar one from 1997 to 2015.

That streak ended in 2015, when Doosan beat Samsung in the Korean Series, a win that started the Bears Korean Series run and pushed the Lions out of playoff contention for five straight years.

Now, after years rebuilding, the Lions are back. That their first playoff game in five years happens to be against the very team that ended it all in 2015 offers an exciting shot at revenge for the Daegu club — but only if they can get the win.

For Doosan, this marks the second year that their star has appeared to wane, only to suddenly come alive when the playoffs arrive.

After years consistently finishing the regular season at, or very near, the top of the table, the Bears had to settle for third place last year, a position they only managed to secure on the very last day of play.

Despite the third-place finish, the Bears powered through two rounds of playoffs to take on the NC Dinos in the Korean Series last year, eventually losing to the Changwon club.

This year Doosan have an even harder route to the top. Having finished fourth, they have already played through both the Wildcard and the first round of playoffs, and the Lions offer a considerable challenge before they can reach the championship series and the waiting KT Wiz.

But despite finishing two spots lower on the table, statistics — as well as recent experience — are still on Doosan’s side. The Bears have beaten the Lions nine times this season, losing seven games and tying none.

The Bears will take on the Lions in the first game of the second round of the 2021 KBO playoffs at Daegu Samsung Lions Park in Daegu on Tuesday at 6 p.m.