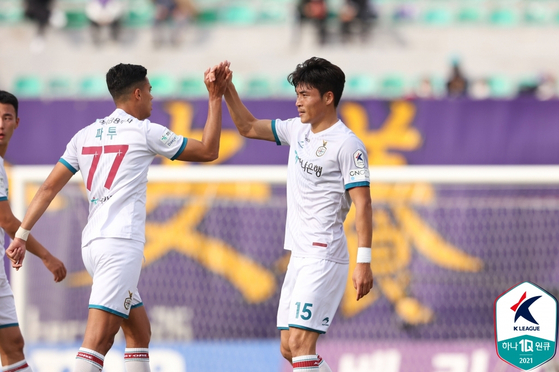 Park Jin-sub of Daejeon Hana Citizen celebrates after scoring the first goal of a match against Anyang FC at Anyang Stadium in Anyang, Gyeonggi on Sunday. [K LEAGUE]


Underdogs Daejeon Hana Citizen took a come-from-behind 3-1 win over Anyang FC on Sunday, winning a spot in the K League's relegation-promotion playoff and a shot at promotion to the top division.

The match between Daejeon and Anyang was the final playoff before the relegation-promotion decider, and, as Anyang finished higher in the regular season standing, only a win would do for Daejeon. 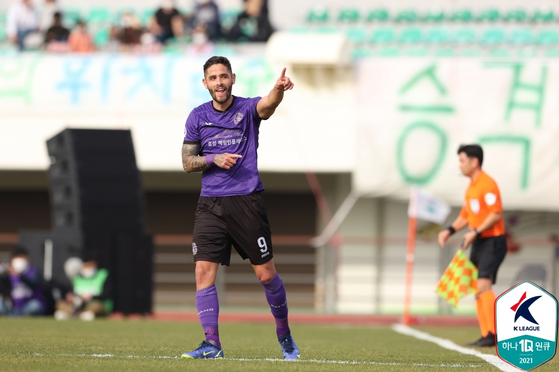 Jonathan Aguilar of Anyang celebrates after opened the scoring just 12 minutes into the game against Daejeon Hana Citizen at Anyang Stadium in Anyang, Gyeonggi on Sunday. [K LEAGUE]


Things got off to a bad start, as Jonathan Aguilar of Anyang opened the scoring just 12 minutes in to the game. It wasn't until 20 minutes later that Park Jin-sub of Daejeon broke through with a mid-range screamer from outside the box to tie the score going into the break.

“There should have been more mid-range shoots even before my goal,” said Park after the match. “As soon as I saw the chance to shoot from mid-range, I thought that I should go for it.”

Going into the second half, Daejeon went on the offensive.

Bruno Baio broke through in the 69th minute to give Daejeon a 2-1 lead, continuing to hammer on the Anyang goal for the remainder of the match. Bajo's persistence paid off in the 85th minute, when he scored his second goal of the game to give Daejeon a 3-1 lead. The goal was originally ruled offside but overturned on VAR. 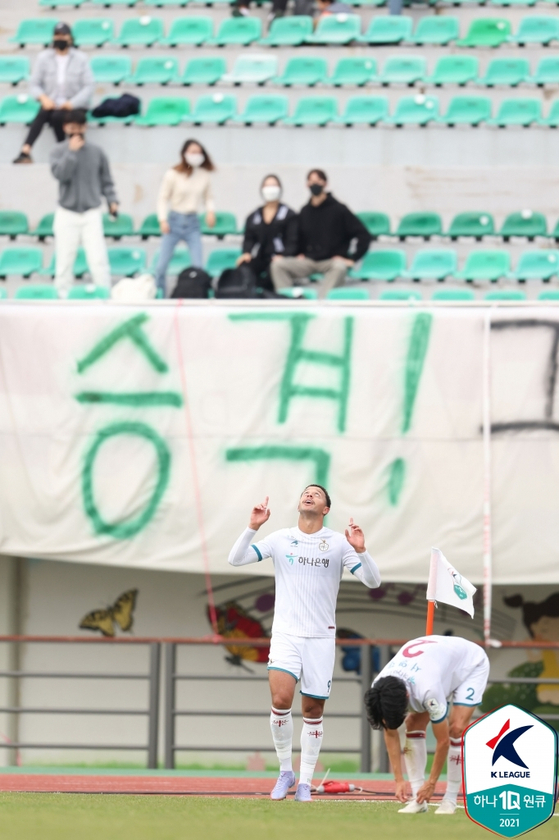 Bruno Baio of Daejeon Hana Citizen celebrates after scoring for the team in the match against Anyang FC at Anyang Stadium in Anyang, Gyeonggi on Sunday. [K LEAGUE]


Six minutes of injury time were added to the clock, and Anyang pushed to make up the two-goal deficit but to no avail. The whistle blew as Daejeon clinched their ticket to the playoff against the second-to-last place K League 1 club. Gangwon FC is currently in that spot with a few weeks left of K League 1 action.

“I shouted quite a lot during the match,” Park said after the game. “I want to thank our fans for coming a long way to support us, we will return the favor with a promotion.”

Daejeon have been on good form lately, scoring 14 goals in the last six matches. They also have the second-most goals this season in the K League 2 behind Gimcheon Sangmu.

Daejeon haven't been relying on one high-scorer to do the bulk of the work. Instead, the goals are spread out across different players, which is a good sign for the club. There are more than 10 players who have scored at least two goals this season. Park Jin-sub now has five goals, Won Ki-jong has four, and the best scorer is Masatoshi Ishida, who has nine goals.

Daejeon will face the second-to-last K League 1 club twice, home and away, during December. Daejeon will be looking for a chance to return to the top tier after seven seasons in the K League 2.