In 6 percent of births, one parent is foreign

In 6 percent of births, one parent is foreign 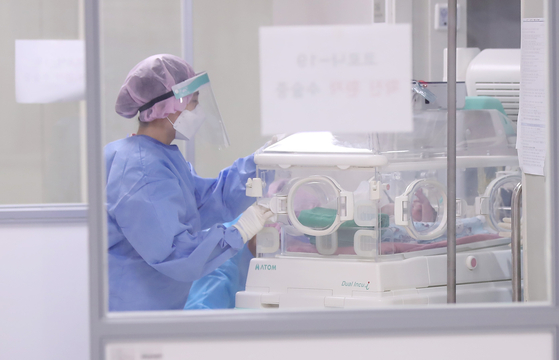 Newborn at a hospital in Goyang, Gyeonggi, in August. [YONHAP]

By some measures, Korea is becoming more diverse.

The ratio of newborns with one foreign parent was 6 percent in 2020, an all-time high since the statistics were first compiled in 2008.

A total of 16,421 children were born to a “multinational” couple, down 8.5 percent on year, according to Statistics Korea. The overall ratio was higher as the number of births in the country fell significantly in 2020 due to Covid-19.

The ratio of newborns with one foreign parent broke 5 percent in 2017.

The statistic agency’s annual report on multinational families found that the Covid-19 affected marriages of multinational couples as with all couples in Korea. Wedding plans were delayed by many due to social distancing regulations.

Border restrictions further complicated matters for couples in which one person is born outside Korea.

That is a 2.7 percentage point drop on year.

Of these marriages, 66.4 percent were between a Korea man and a foreign woman, down 2.9 percentage points.

Of the marriages between a Korean person and a person born elsewhere, in 15 percent of the cases, the foreign person has naturalized, up 1.4 percentage points.

In cases where the husband was foreign, 84 percent were Chinese, 7 percent American, 3.1 percent Vietnamese and 1.6 percent Canadian.

The number of multinational couples divorced was at an all-time low.

Among the divorced couples, 48 percent involved wives with foreign nationality.

Dilemmas of a ‘risk society’ (KOR)